Sherif, Guy and some tax collectors

I have repainted some details on all these figures as I was not happy with the red cloak that Guy had and also the red Tunic that I had given the Sherif. I keep changing these depending on what RH program I have just finished watching. I think the dark look suits them better. I am unsure what to call the Tax collectors, revenue men perhaps? I wanted these to be different from the rest of the Sherifs men. 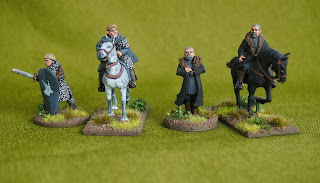 Just some pictures of my US troops taken with my old camera and painted using a wash technique.
Rambo is going to get repainted as I find all that flesh needs a more detailed technique.
They are a mixture of TAG, FOA and Westwind.

I have a Vietnam project in 28mm which was going to be my next big thing. However I got interested in Robin Hood and since have been doing bits as a side project.This will now have to wait as I need to get rather a lot done if I am going to put a Robin Hood Demo game on. Hopefully I can return to Vietnam late August.

I have completed over a Platoon of US figures plus a few extra bits. This is the first platoon of VC that I have painted. My US figures were painted when I first experienced trouble with my eyesight and was too vain to get glasses. I wish it was that simple as it took awhile as I had to learn to paint first using progressives, and then discovered cheap reading glasses from the Super Market. These work really well and have since been able to return to detailed painting. The VC were done to the same level as the US figures which is just a wash technique.

A few WIP pictures of some buildings that I am working on. 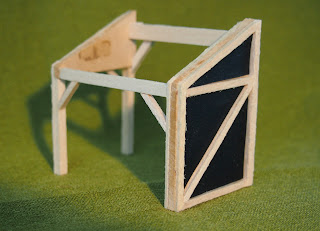 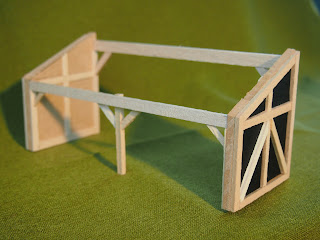 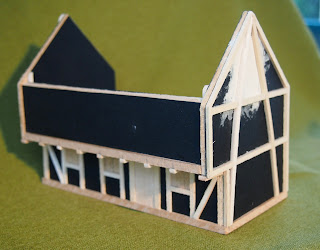 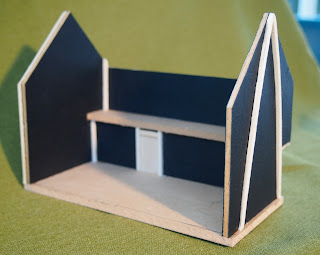 These figures were originally intended for The Sherifs Men but I decided that they would be better used for a Saga Norman Unit. I repainted the shields copying images which I found while Googling.
The mounted figures are from Conquest which now look a little bit low in the saddle compared to other Norman figures I have. The foot figures are from Crusader. I added the plastic Wargames factory archers later. I intend to buy some better metal figures to replace them as I am not that happy with them.

I still need to mount my Leader figures on proper base's and have to do some design work on the flags.
One of the flagmen is an old GW Bretonian figure with a Crusader head. 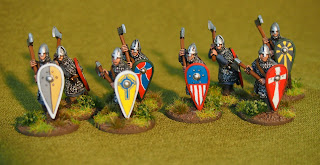 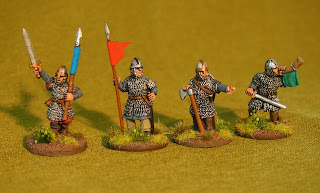 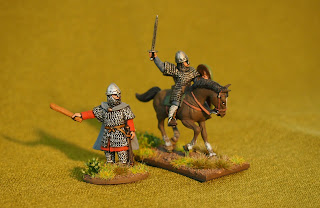 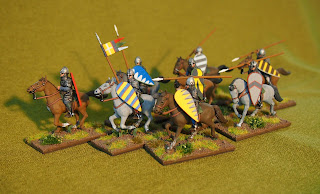 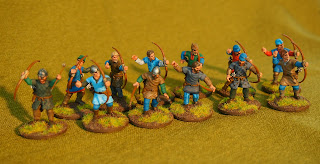 Email ThisBlogThis!Share to TwitterShare to FacebookShare to Pinterest
Labels: Saga

I took some better photos of my Police Unit. They were very hard to take decent photos of as they are painted quite dark. I have also lost the summer lighting so had to use a spotlight which gave me an ok result. I may have to invest in proper lighting in future. The figures are a mixture of TAG and Foundry SWAT figures with a couple of Foreign Police Advisors from a Foundry Future War pack. Some have weapons swaps. All my research was done on the Internet where I found that the Units seem to be equipped with whatever is available. I am hoping the MP5 will pass as Hungarian AMD65's.

I intend getting an Imprint Hummer and a pickup but have not found a suitable double cab ute in the correct scale. 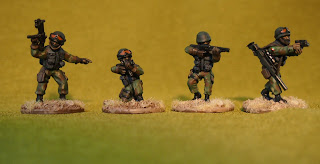 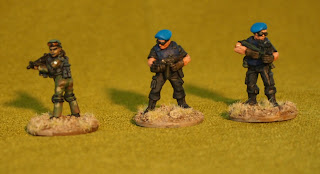 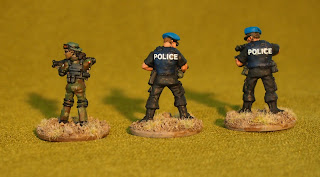 I had forgotten about these photos on my old camera. Last December I had a game of Skirmish Sangin with mate Ray his son Michael, and Colin one of the designers of the game. The excellent terrain was built by Craig.
This was my second go at the game and was remembering quite a bit of the factors which you have to subtract when you want to spot or shot. We had a good game but my unit suffered quite a few casualties.

The figures shown are my Afghan Police Unit. 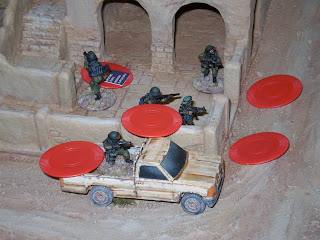 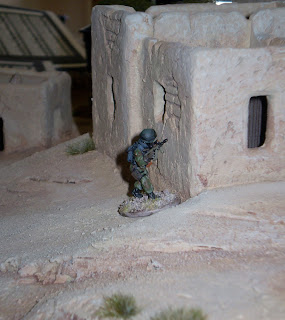 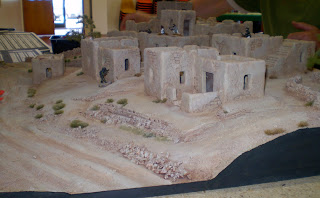 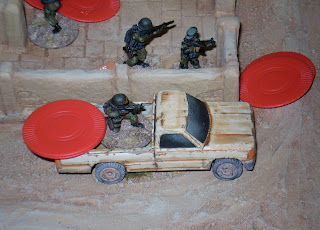 Robin Hood some progress made.

Since I have bought a new camera and started this Blog I thought I'd retake photos of everything done so far.
The exceptions are. The Sherif both versions and Guy are going to get another colour change so I will rephotograph them later.

Robin and the Merry Men. 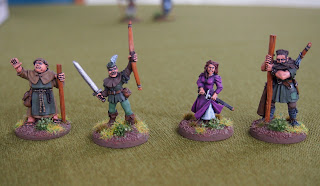 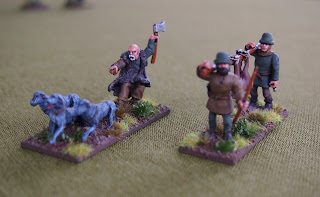 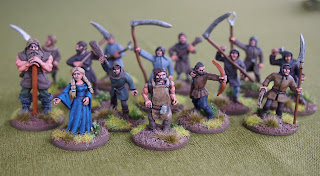 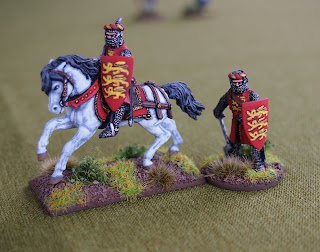 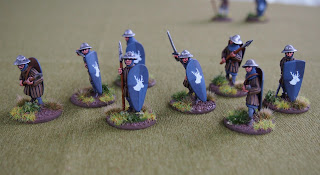 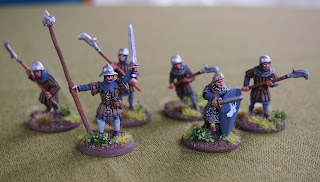 I know this is a bit too early to appear, but it is Robin Hood after-all.
Foundry Fantasy Catapult which was a real swine to get it to this stage. 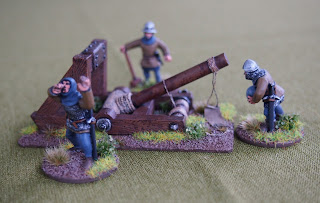 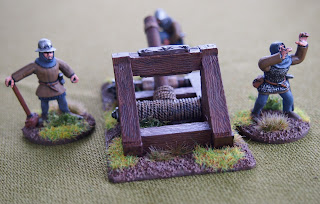 I added some photos of the WIP's of the Castle on Lead Adventures posted here.New photos at bottom of page.

My Robin Hood project, from the beginning.

I thought I'd start posting about a project that has been going for over a year with no end in sight just yet.
I planned to get this ready to play a Demo game at our local Call to Arms gaming event, but not sure what year?
However, I keep getting sidetracked by other projects and design problems with the terrain and figure suitability. 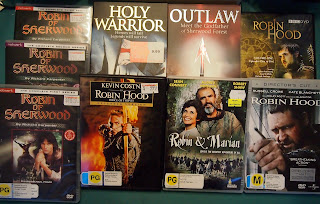 I started a thread on Lead Adventures Robin Hood but have had problems posting regular updates with all the different changes I had been making.

The main problem I have run into is getting the correct looking figures for the Sherifs men. I first used Conquests mounted Normans and Crusaders foot figures. After watching a few Movies and series I decided that I did not like the look of the Kite shields and they just looked like Normans to me. I have since repainted the shields so I can use the figures as my Saga army. This is how they looked before and I will post a photo of them later on with the repainted shields. I can still use the CrossBow armed figures for Robin Hood as they lack shields.

I have been building a Castle which has been interesting to say the least. It started off as a Mini Art 1/72nd scale model to which I added green foam to add extra height and bulk. I dont want to post WIP pictures as I'd rather post finished pictures on the Blog. I will continue to post them on Lead Adventures as they seem to be popular there start of Castle build.

To replace the Sherifs figures I have been painting some BlackTree and GW figures. It took quite awhile to get enough GW figures to make a start on painting. I wish I kept quiet about this as the demand seemed to rise once it was suggested on Lead A. However I have plenty now to get on with. I also just received some Medieval figures from Crusader which match my other figures quite well.

As of right now I am converting some Wagons to use as something to Ambush in a scenario I have in mind.
Posted by Daniel Wade at 23:53 No comments: