Isn't it funny how how some ideas keep resurfacing in this Hobby of ours? Often we have a mad idea that gets put aside when other projects need to be completed. I had a 15mm Battle for Berlin German force, as well as a Soviet force to oppose it. Some time ago it was used in a massive Battle in my old games-room with a former Club-mate.  My Germans were made using mainly German Tank crews with over-coats from Greenstuff. I don't think I could do that again as my eyes need reading glasses these days and my hands are less flexible than they used to be. So when I saw that Warlord had brought out The Last Levy I just had to buy it. This sat in my Lead pile till I was interested again by the Building of the Reichstag link on Lead Adventure. There is no way that I am going to copy this build and will instead focus on a general looking street area. 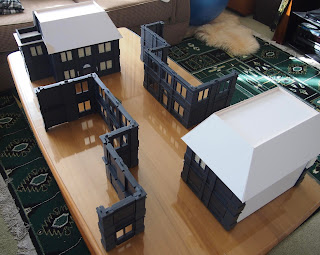 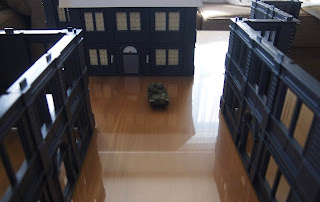 I have had a Dust Tactics Operation Cerebus set kicking around for awhile in a semi complete state and meant to finish it over the Xmas break. However my partner decided that I should instead paint the kitchen. The kit gives enough parts to make a three story building, but I wanted to make two seperate buildings which meant tracking down some extras on eBay and using plastic card for the rear walls. I also made some resin windows which I have posted about earlier. Lately (because its too wet to work outside) I have made some progress. I need to pour some more windows to put into the roofs. I'd like to add a third story to these, and I wish I could get hold of more of these kits but they seem to be out of production. I bought the last in store from the Dust website and one from eBay. These are the smaller tenement buildings which I am still playing around with. The idea is of using them on the board edge and they will be open at the backs. Not all of Berlin was bombed out so I might be able to just make wrecked roofs for these and the other buildings as alternatives.

Now onto the Wanze. I really like this little vehicle but as most of my Late War vehicles are 1/48th and 1/50th I have had to compromise and buy this 1/56th version from Warlord. Its a nice little model but feel that 1/48th is a better scale as they have made the gunner tiny, to made him look correct with the vehicle. I know he is supposed to be a boy soldier but his head is tiny compared to the boy and girl soldiers in the Last Levy set. I noticed that the US Tank Commanders I bought from Warlord are also seriously under scale when compared to their Soldiers. I painted the Wanze following John Bonds method link but afraid that I went off script and started dry brushing and my own methods to weather it. 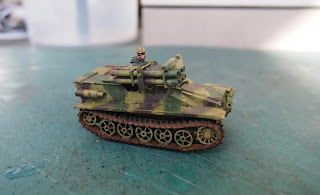 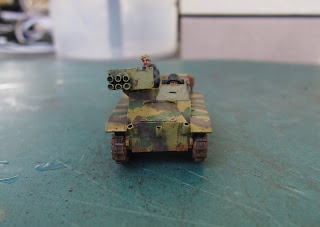 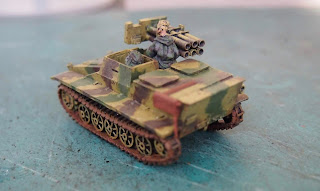 I also have five resin wrecked two story buildings which need to be remodelled. They were bought second hand and I have done nothing with. I also found another Blogger has done this setting before using MDF buildings. link  which is worth looking at for ideas. I think I need to do a good job so this will be an occasional project. I also really need to finish off my AZW collection as well as some more Vietnam related painting.

Email ThisBlogThis!Share to TwitterShare to FacebookShare to Pinterest
Labels: Battle For Berlin

I mentioned in my last post that I had bought some Oxen Teams from 1st Corp. These turned out very nice but were tricky to paint as they were painted separately and then based. I then sculpted the yokes out of some hobby wood and then made and painted the neck parts out of paper clips. These were then half painted and attached to the necks and yokes and then the top parts were then painted and all were varnished. The Oxen have only one pose but you don't really notice it. The Team Handlers are a little small compared to my other figures but  painted up nicely. 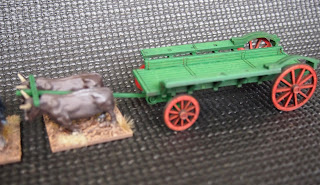 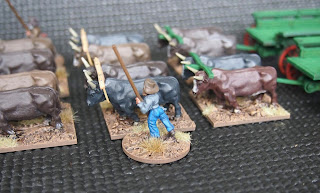 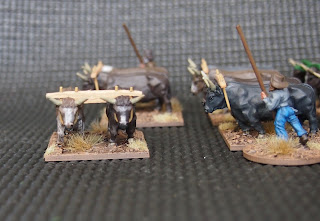 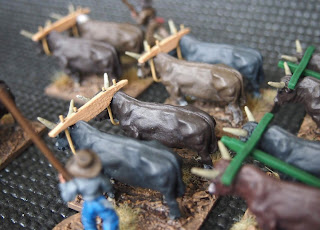 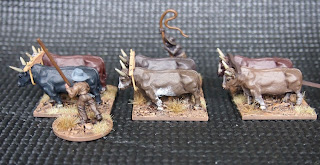 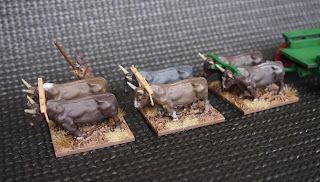 I also painted up some really old Hinchcliffe French Horses to pull my Ammo wagon. I think their age is showing a little but they will do for now. All the teams were unfortunately varnished very heavy handed by me and came up gloss. I had to hand Varnish them again but they now look really dark. The Wagon Driver and Native team handler are from North Star. All Wagons are from 4Ground which still look really large to me. 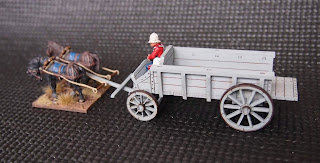 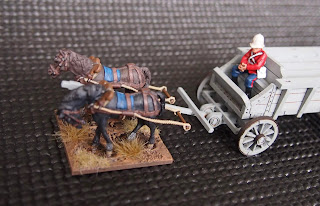 I had ordered an extra Oxen Team so bought a Boer Wagon. I had three different unsuccessful attempts to do the cover, and ended up using a serviette from a Take-away as it was nice and thick and also lacked any pattern impressed in it. Unfortunately I managed to distort the first hoop but did not notice until too late. Its also too tall to fit in my storage box with the other wagons so has to lay on its side. 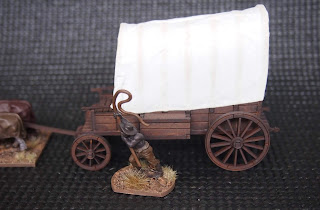 When I ordered the Boer Wagon I also ordered the Civl War Ambulance. Little did I realise that it was Huge and can't see how you would lift a casualty into it. I modified it to look like the Command Wagon from the Film Zulu Dawn. I have a figure in mind to be glued inside as Pulleine. I also found a use for the single based Infantry figure I mentioned in an earlier post. 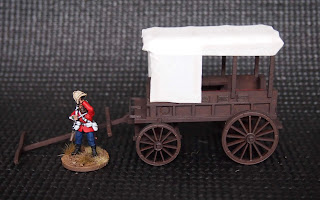 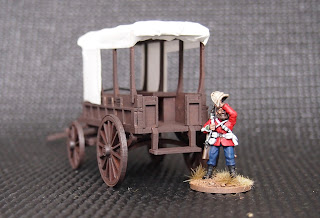 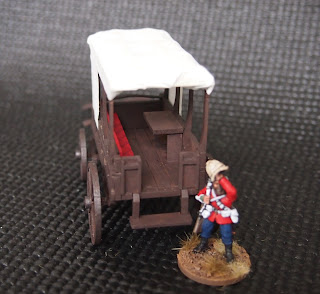 I hope this is Legal? I took some scene shots of the Wagon from The Film "Zulu Dawn" my version is quite a bit different but I hope it gives the impression of a Command wagon, if such a thing existed. 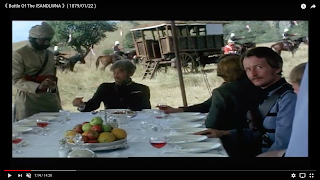 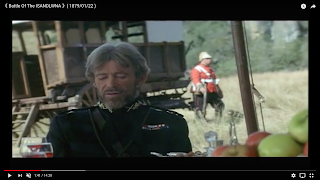 While looking for some Oxen to pull my 4Ground Wagons I found that 1st Corp had some very reasonably priced teams available. I also noticed that they had a set of Tintin characters. Now when I was a kid back in the Late sixties early Seventies we (my Brother and I) had only the Beano and Dandy as Comics while our rich cousins had such exotic items such as Tintin and Asterix.  I did not have much exposure to Tintin until the Movie came out but he always seemed an interesting character.

The figures are really well sculpted and painted up well. I managed to paint Tintin with Rosy cheeks but am disappointed that the photos don't really show them well. I hope they produce the Thompson Twins next.

I made a mistake in gluing the figures down to bottle tops and did not think about basing until they were varnished. However I came up with an idea to use some Warlord plastic bases glued back to back. The top recess hides the figures bases well, while the bottom recess hides the magnetic sheet.  I was lucky to find the sheet in a mixed packet in a 2 Dollar shop which has the correct circumference. I later wished that I had sculpted a Cobblestone surface.

One day I will get organised and name these A,B,C etc but in the meantime they have their WIP names. This unit is another firing line very similar to the other one I painted previously. It only differs in the Officer and a couple of other figures. All Black Tree of course. 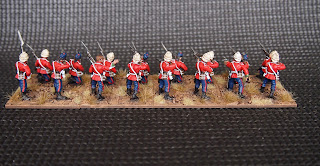 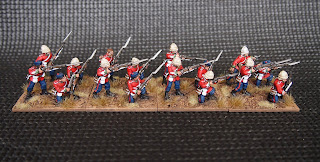