It looks like I wont be finishing anything off this weekend so I thought I'd wish everyone a Merry Christmas and say thank you for looking at the Blog. 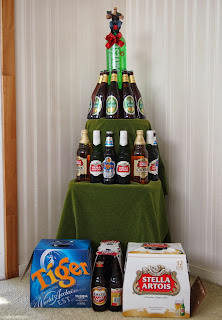 Right now I am trying to base up some Mounted Merry Men who have been painted but don't have their shields attached or proper bases. I have made the bases out of plastic card and have undercoated them, but have to clean the house today as the folks are coming around Christmas Day. I may not do anything more on this till after Xmas Day as I am also working this week.

I have been chatting with mate Tyrone about doing an African ImagiNation project in 20mm loosely based on the Crisis in Congo in the sixties. In my mind I am calling the nation Pomgolia, ANZAC's will get the joke hopefully. I am planning to get some French Paras from Indo China and will use some left over WW2 Tanks that do not really fit into my WW2 armies. I also have lots of terrain that may need a slight mod to fit so it will be a cheap project (how many times have I said that?).
Posted by Daniel Wade at 12:58 No comments:

I have two Games of War Boats for my Napoleonic Peninsular War Collection, which I intend using for my Pirates project with just a change in Command figures and Marines. The sailors will work as they are.
The project is just a small scale one as I like the Sharp and Horn Blower books and TV shows and am not really into large scale set piece battles.

I intend to go back and do some more work on the sails as they look too plain. 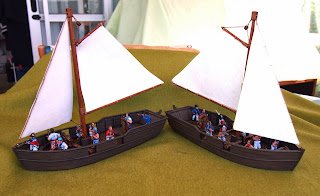 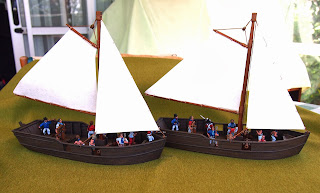 I have had some success bidding on a few items on Trademe (New Zealand only trading site).

I first won Legends of The High Seas in excellent condition for a good price. I have been searching for this a couple of years. Turns out I bought it from a Club mate but did not know until I won.

I then won a Playmobile Pirate ship which I had watched for a few auctions going unsold, but decided to get it even though I thought the price was too high. I was not sure of the scale but had seen one being converted on a Blog post somewhere. Same price as LoTHS actually so I don't know why I held back now.

I have just won a complete Mega Blocks Black Pearl for NZ $35. It seems complete as far as I can tell so am very happy. This will be made into the Black Pearl Pirate Ship.

The cost for the four Ships is about $150 NZ plus the cost of converting them which is much cheaper than buying four resin Ships which would be much smaller vessels. 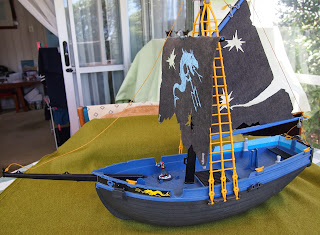 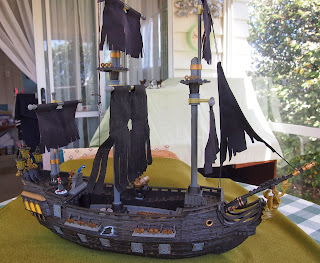 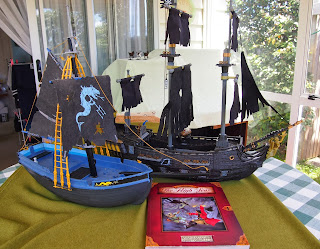 Email ThisBlogThis!Share to TwitterShare to FacebookShare to Pinterest
Labels: pirates

I remembered that I had painted up these figures for my World War II German Armies. I think that they would work just as well for Inter War Pulp Games. I am planning to paint some Copplestone and Brigade Games Germans for my BOB Chinese Forces at some stage which will also do double duty as a Body Guard for these figures.

The Female is from Copplestone while the males are from BoltAction. 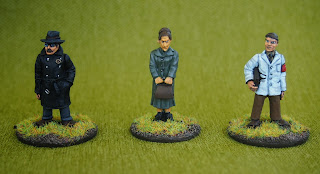 The Archaeologist figure has been completed for months while I thought about a gang for him. He is a Copplestone figure with a WestWind head. The eight riflemen and Belgium Officer have been sitting on my desk cleaned up and based while I got distracted by other projects and was not quite sure what to do with them all. Then it hit me,  SA Troops conducting field trials on newly designed uniforms (sounds like a reasonable cover). Any treasure stumbled across (like the Ark of the Covenant) would of course be discreetly smuggled away. I then added a Foundry Officer figure (with Eagle insignia removed and lower pocket trimmed to an early pattern), a Pilot figure and the female Archaeologist converted from an Artizan figure.

Edit, since my friends keep referring to my Leader as Herr Flick and the Female as Helga, I have decided to rename them as such. I keep forgetting what their names are anyway! 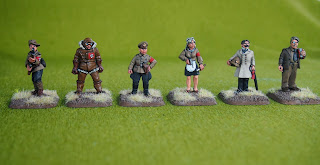 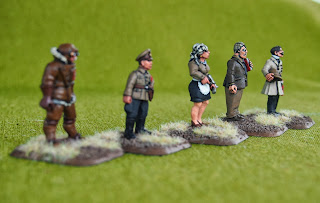 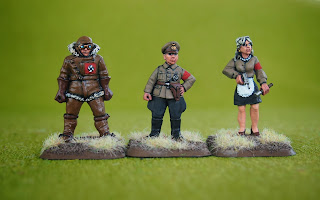 Golden Brown, funny I don't remember this video but have had the Greatest Hits Album for over twenty Years (or is it closer to thirty?). Anyway the set is inspirational for Pulp settings.