A Demo game of Sharp Practice that we had put on at ValleyCon 2010. We had also run it at Call to Arms in August 2009 which Ray has posted a very good report on his Blog. Unfortunately I only took photos at ValleyCon. http://rayswargamesroom.blogspot.co.nz/2010/08/sharp-practice-fondlers-pirate.html
The Marines, Sailors and boats were mine. Unfortunately the Barbary Pirates seem to have gone un-photograped.
The Boats were not properly finished till a few weeks later. The land forces and most of the buildings were by Ray. 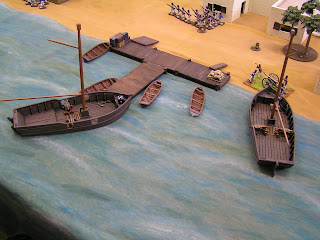 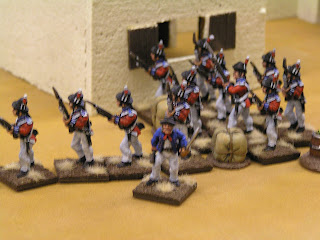 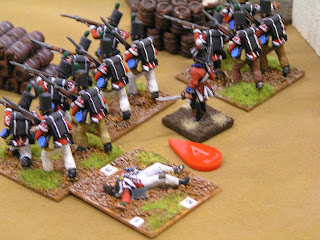 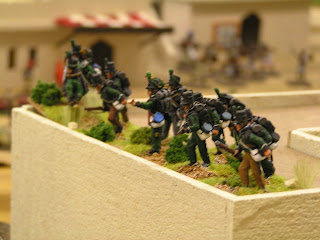 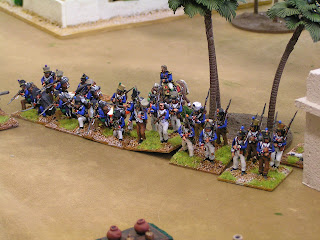 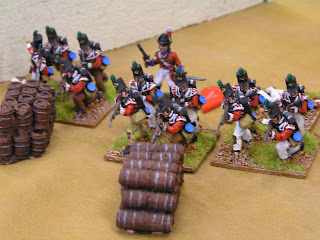 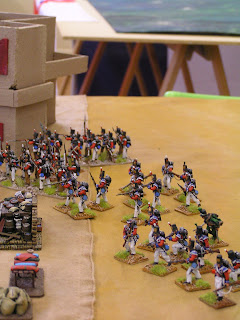 Another Demo game at Call to Arms. This one is Stalingrad in 28mm using Platoon Commander. A good set of rules but maybe a little too detailed. The buildings were made from cork tiles and were from Rays, Scotts and my collections. As were the figures and models. 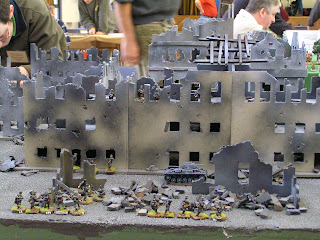 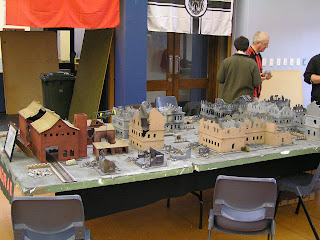 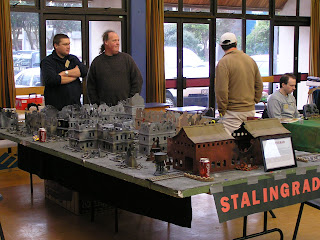 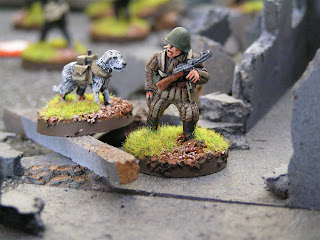 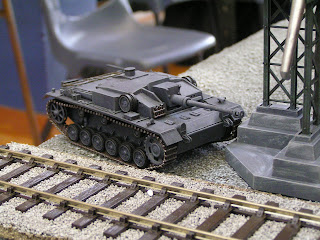 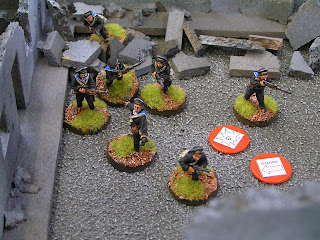 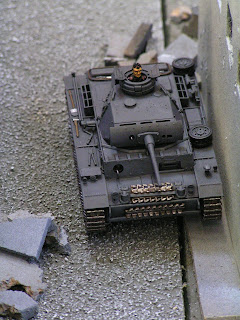 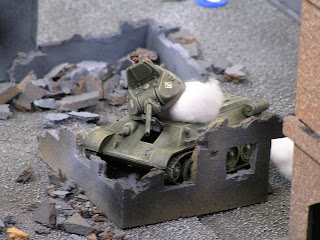 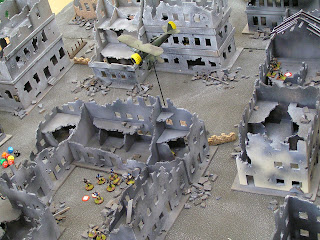 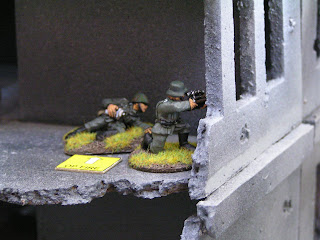 Email ThisBlogThis!Share to TwitterShare to FacebookShare to Pinterest
Labels: Call to Arms, WWII


I have been digging out some old photos of Demo games Ray and myself have put on in past years at our Clubs yearly event called Call to Arms. This game was Early WW2 in 28mm with French defending against a German attack. Ray supplied almost everything but I supplied some German Tanks and Infantry. The rules we used were a version of Necromunda that Ray's old club mates used in Edinburgh. 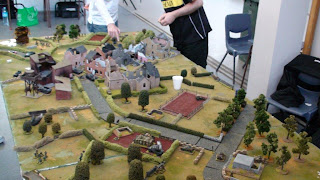 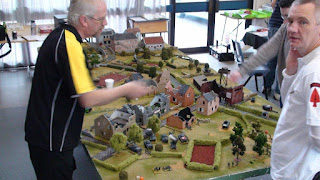 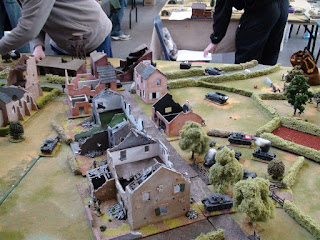 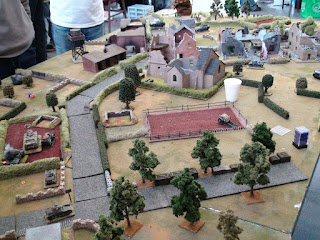 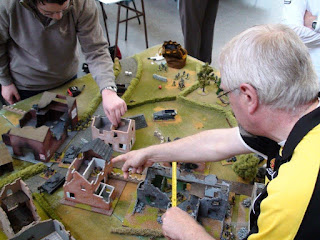 Email ThisBlogThis!Share to TwitterShare to FacebookShare to Pinterest
Labels: WWII 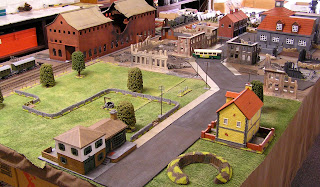 No I'm not calling you names,

TWAT is the Too Fat Lardies Troop Weapons and Tactics WW2 game for 28mm figures. I use it to play solo games as there is no way of knowing which unit is going to make its move next due to the card system used. It takes quite a bit of preparation in getting the cards sorted out for each unit so is not really suitable for pick up club games. I'm intending to use Bolt Action WW2 for that.
TWAT also handles large formations quite well which I think Bolt Action would struggle to do.

The above picture is my Wargames table set out for a game of TWAT looking from the German side.
The Germans were to take the railway building with a radio station hidden behind it as their first objective.
The second objective was to take the crossroads which is just behind the Renault bus.
The American defenders were a small Mechanised Platoon which had some tanks in reserve.

The Germans took both objectives with but with heavy casualties.
I was painting a Platoon of US Paras at the time but failed to have them ready to make it to the game.
I guess the US can attack next time. 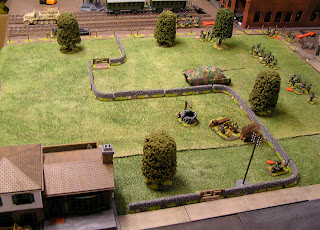 Total US forces I owned at the time but was all was not used in the game. 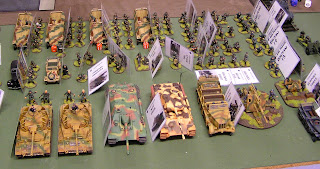 Total German forces I own and was used for the game.

The main characters for my Robin Hood project.

The Games Workshop figures are known by other names Bertrand Le Brigand (Robin), Hugo Le Petite (John) and Gui Le Gros (Tuck).
As I have duplicates I am using some of the figures for minor characters. 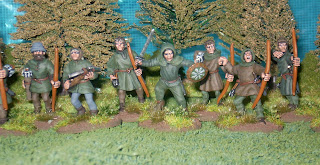 Some merry men with Much (centre) who was converted from a Warlord plastic Celt with hand painted shield made from a tank cupola lid. 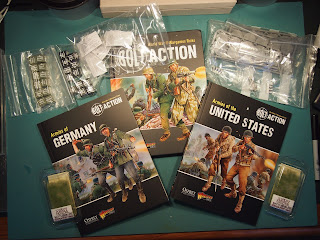 I ordered the Bolt Action rules with the German and American lists to see if I can get some games in at The Warlords Club. There seems to be some interest in these games on many forums I read.
All the books look really well produced as you would expect from Osprey. I have only had a flick through them so don't know how they will play yet.
I also bought two sets of the dice which with all the figures and vehicles I already own means I can provide everything needed to play which would be a first for me.

The two packets of Jungle grass are for Vietnam (another stalled project which I just restarted).

A packet of Indian heads and a set of Commando heads.
I will use the Indian heads for 14th Army conversions as I already have an Indian pattern Armoured Car and Early Stuart from Chieftan Models. These were given to me as a consolation when they messed up two orders before they disappeared. (Now I see how busy Paul Hicks is I understand why he had problems fulfilling orders)
The Commando heads are to fill some gaps in my Foundry Commandos platoon which have yet to be painted.
I will use an already bought set of Warlords plastic British Infantry for the conversions.

I also have a packet of flashing LEDs for my castle project but I think they look more like strobe lights rather than the candle light I was hoping they would pass for. Oh well I guess I can turn the Castle into a disco for my Zombie project.
Posted by Daniel Wade at 00:59 No comments: 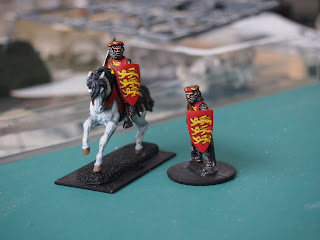 These figures are from BlackTree design from their Crusades range. The horse is from a Reaper set which I've had in my Lead pile for years.

The horse is such a nice looking sculpt that I had been looking for a suitable use for it, and when I decided to add Richard to my Robin Hood Project it just worked perfectly.

The shield designs are a transfer from BattleFlag. Unfortunately they were meant to be used on a white undercoat which I did not realise until I had applied them over a black undercoat. (I'm a bloke I don't read instructions) I then had to repaint them using the transfer as a guide. I'm actually really pleased how they turned out.

I am in the process of doing the basing this weekend which is my least favorite part of painting figures..
Posted by Daniel Wade at 00:28 1 comment:

I'm in a Wargaming Rut.

I've started this Blog in an effort to get out of the current rut I find myself in.

I think it all started when I pulled out of playing Flames of War in tournaments and Club games as well as a couple of friends moving away and end up only playing a couple of games a year.

I've often tried to paint up new projects for other game systems but without the motivation to finish anything for a game I usually get distracted by something new.

I also spend way too much time on Forums without contributing anything constructive.

I have seriously given serious thought to selling everything up and dedicate my time to building a combined Scaletrix and railway layout. I think there would be a few issues with scale and space but it would be fun to do.

On the bright side though, I usually manage to put on a Demo game at Wellington Warlords Call to Arms each year with Wargaming mate Ray.

I think the best way of starting this is by posting some photos of past Demos followed by projects that I am currently working on.

And please bare with me as I have not created a Blog before.
Posted by Daniel Wade at 22:41 No comments: