I was invited by Scale Models Wellington (IPMS) to put on a Wargame Demo. This was via my Gaming mate Tyrone who is a member of the club. We decided to go with a Vietnam Game rather than the ANZAC theme we originally planned (as we had not painted enough for that).

I wanted to use my Convoy Vehicles as I had been playing around with a scenario in my head for about a year and have never used the vehicles. I decided to use Bolt Action as it should be simpler than Charlie don't Surf to pick up on the day as we had not done any play-testing.

I found some rule modifications on this Blog. Blenheim to Berlin

The idea was that a Convoy of Trucks escorted by a V100 and two Gun trucks were to cross a river. The result of the game depended on how many supply trucks were driven off the table verses how many the VC destroyed. There being two M34's and two low loading Trucks (Mack's).  The Convoy Commander rode in a Mutt. The VC were to set up no closer than 12" away from the US. The Convoy was moved 12"+1D6 when the first green dice was pulled out.

I first took the US and managed two moves to just exit the Bridge and all Hell let loose. The Convoy stalled with heavy losses. Round one to the VC. Seems that I had underestimated the fire power of the VC who had; three RPG stands, two MMG's, one mortar, one section of Infantry and a Commander. I also felt that I had made a mistake letting the VC set up so close. We had another round this time with Tyrone taking the US and coming from the other direction. Much the same thing happened with the VC just sitting and waiting for the Trucks to arrive and then had a Turkey shoot. Round two to the VC. 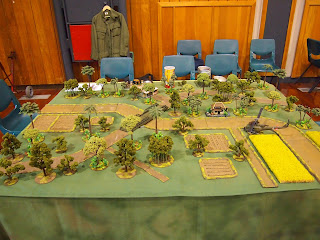 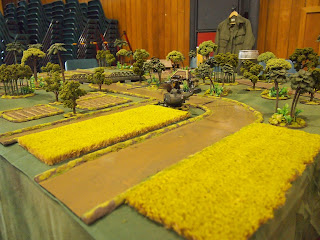 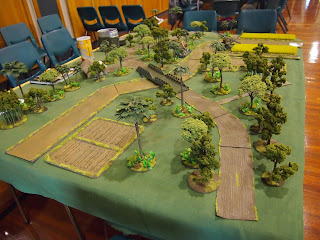 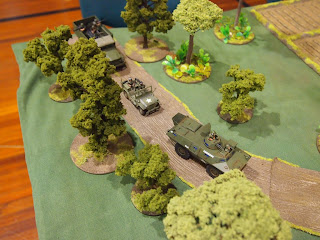 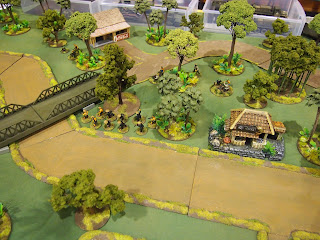 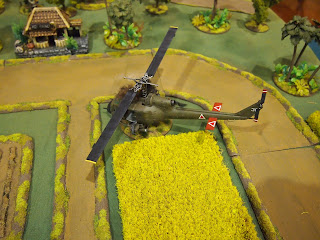 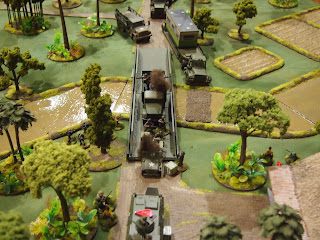 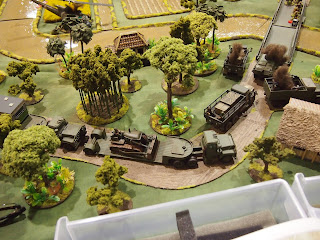 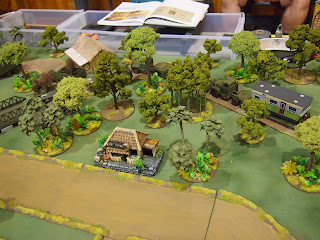 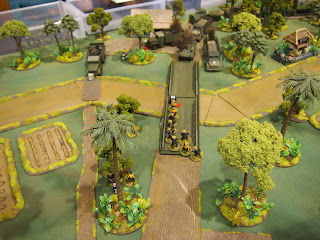 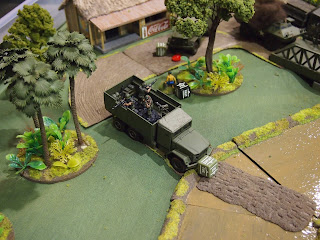 Saturday Night I had a rethink about the scenario and decided that I needed to bring more Fire Power for the US. So I brought out my ACAV's (which I had never used). I had also found my box of Huts and Civilians which I had forgotten that day. I also decided that the VC would set up no closer than 12" to the road. The extra buildings helped to make the terrain look a bit denser. The result for the US was better with them killing most of the VC, but the cost to them was still too high with the convoy stalling on the bridge again. At least this Time I managed to get all the Convoy on the table. 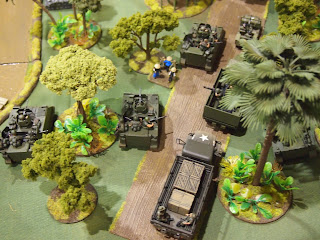 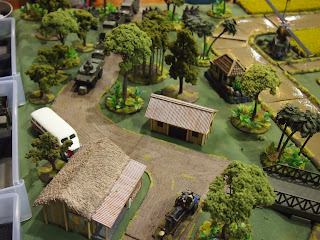 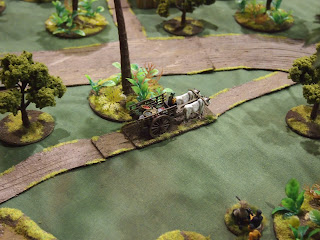 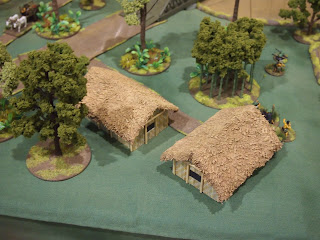 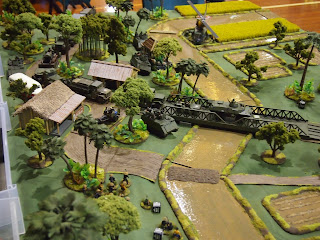 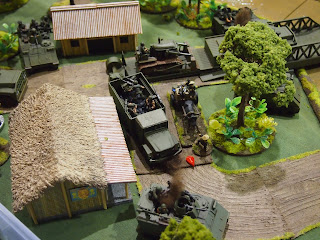 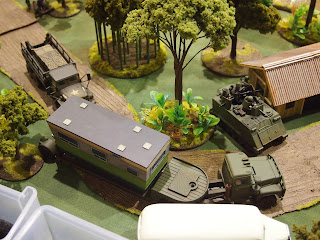 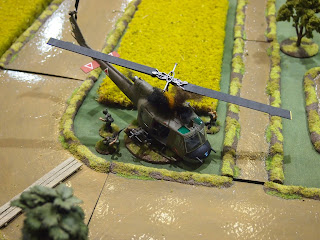 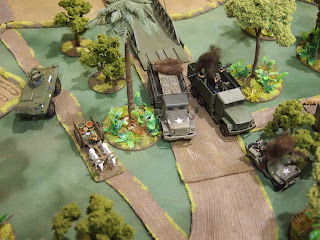 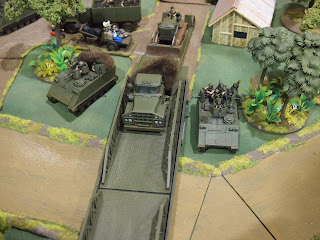 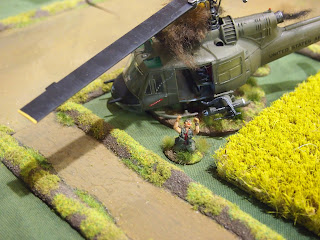 If I was going to run this again I would have the ACAV's run ahead of the Convoy and set up at both ends of the Bridge before the Convoy attempted to come on. I also think a larger table would have helped as the VC would have had to spread out more. We got quite a bit of attention from the Public, more than I would normally get at a Wargames event. Most people did not realise that we were having a Wargame and seemed more interested in how I made the trees. I also was worried about all the little children waving their arms over the table pointing at things but no damage was done other than by packing/unpacking items.

All I bought at the show was some 1/48th Tamiya Kits; Elefant, Achilles, 7ton Armoured Car and a rechargeable desk lamp.

I will post some photos of the display Models next time.
Posted by Daniel Wade at 16:39 No comments:

Today I put on a Demo game of Bolt Action on at the Local Scale Models Expo. The game is using an adaption of the rules for Vietnam which I found on a Blog. As there is still another day to go I will write the game up later.

What I wanted to talk about is I had an idea for a container to use for holding the Bolt Action Dice. I had been using an old plastic Toner container at home and thought I'd better find something better looking for this Public game. I had a look around the Local Comrades Army Surplus store but could find nothing suitable for Vietnam. I first looked closely at a Billie tin which came in too sizes but felt like they looked a bit rubbish. I then found a German Army style Mess kit for only NZ$26. I think that it is actually an Austrian version as there are many versions of these made Post War. I showed it to my partner who said that they used them in her Refugee Camp in Thailand (she is from Cambodia). I then did some more googling and found that the North Vietnamese had a similar style but with folding metal handles on the front. It felt a bit sticky inside from which I presume is from cooking oil. I tried three different ways of cleaning this but was not really happy so instead lined it with some Yoga Mat material which also quietened it down when shaking the dice up. It has worked out really well and a Gamer said he would copy the idea so I thought I'd better post it first. Haha. The bottom container can hold two tape measures plus four sets of Bolt Action dice. The smaller container holds a few sets of GW dice and some pin/hit markers. The lid is useful to put the pin/hit markers in when playing a game. 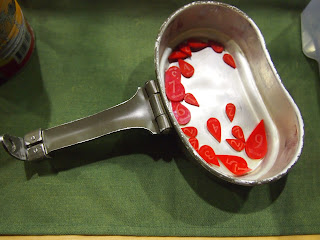 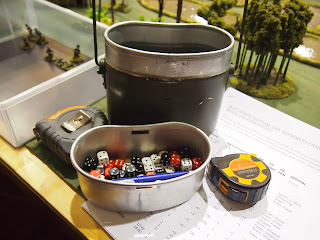 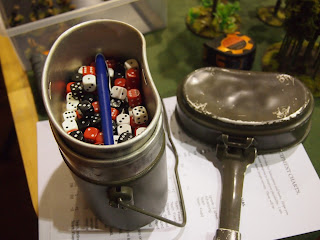 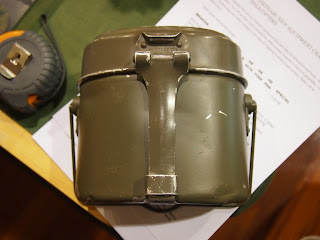 Chain of Command Patrol and Jump Off Point markers.

I had some fun painting these markers.

First up I have read the Rule Book several times but have not had a game yet.

First off I undercoated the top surfaces with white primer and then filled in all the details. I had some issues getting paint into the recesses and now wonder if I would have been better off either priming the surface Black or trying to run some Black Ink into them. I then sealed the tops with Dull Coat. After that I turned them over and then painted them with some cheap poster paints. I then sealed them with Dull Coat. I had issues here as the Dull Coat ran down the edges and stuck the disks to the box I was using to support them. I then had to go back and repair the damage to the edges where they were showing White Undercoat. I also took the opportunity to put some paint into the recesses as they seemed a bit too obvious in places. When I resealed them I put the disks on some Bottle tops and still needed to put coins under the small disks. Thankfully everything came out ok but wonder if they will get damaged with handling? The disks are not perfect but I am pretty pleased with them. 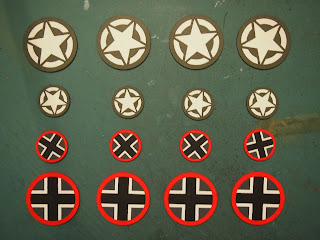 I would like to get some Union Flag versions of these Disks or maybe I should make up my own at some stage. I only have Dads Army or Early Commandos for the British at this stage so using the Allied Star seems a bit wrong.