I dug out some old church ruins I built when I thought that I would be playing 40k, but that never happened so they have been gathering dust for years. I added some tufts from GW and then some Gale Force Nine snow. I experimented with the snow as there were no instructions that I could find as to how to apply it. I ended up mixing it with some cheap white poster paint and just laid it on some white paint that I had put down just before hand. Some places I did not bother as I had some left over so just plonked it on which seemed to look ok. I now just remembered that I had intended to use some wet look paint from AK Interactive which I might do later. 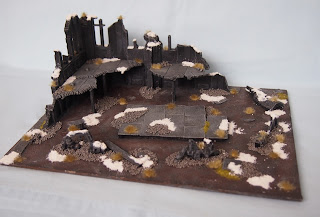 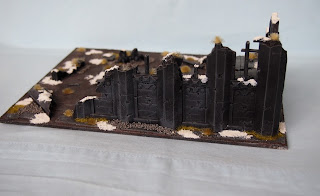 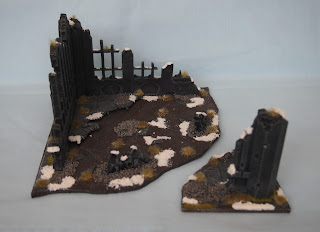 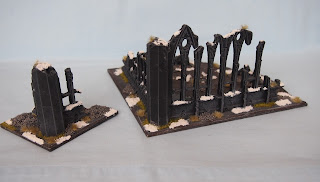 I have also just finished the Necromancers Warband. I was going for an evil twisted look and think that the figures look ok but just a little bit dark. I might have another go at photographing them later on as in game shots tend to look better. 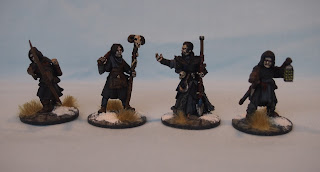 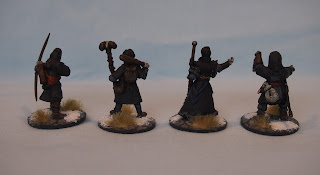 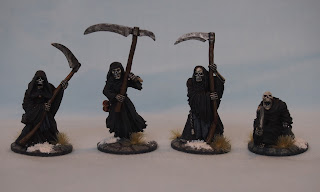 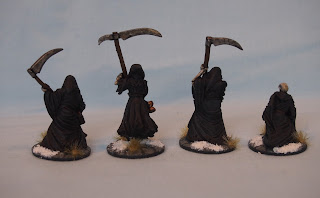 Email ThisBlogThis!Share to TwitterShare to FacebookShare to Pinterest
Labels: Frostgrave

I feel that I have worked through the game as far as I could reasonably play it. At the end of turn nine I decided to call the game done. The result is still a bit unclear which is quite in theme with the Vietnam War. I could say the Free World Forces have won with 50 points to 48. What is bothering me is that should I count the refugees as being safely away from harm? There are VC on the same road threatening the HQ which is just managing to defend itself! Only one Rice Cache was found and one building set on fire and both platoons are down to one effective squad. On turn ten I could have set fire to another building but am nowhere near the hill containing the Tunnel complex. I am also short of ground personal to do anything active on the Free World side while the VC can still hit back.

Changing the cover rules to suit the VC and not counting casualties caused by Air Power has made some difference between the VC being effective or just being a speed bump for the Green Machine. I have also learned that it better to use a Big Mans activation points to remove shock points rather than activating units. (Unless you want to do something urgently). Now I have worked out the wrinkles in the rules and the scenario its probably time to play something else. (lol) 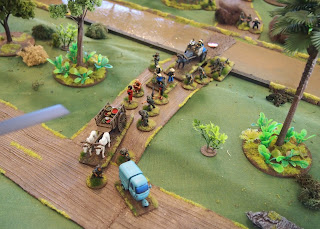 I made a start on a Necromancers party and thought I'd take some photos before I do any sealing. The reason for doing this is I usually paint figures a bit on the dark side and sealing makes the figures even darker. I had the reaper figures (GW and Black Tree) in stock and wanted to use them for something similar for a Pulp setting but then Frostgrave came along.

The party consists of a Necromancer and his apprentice, an Archer, Treasure Hunter, three Infantrymen and a thief. I think my eyes are getting a bit weaker as I am having a problem painting the eyes and skin-tones as to how I envisioned them. 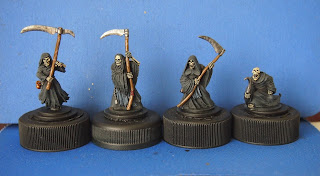 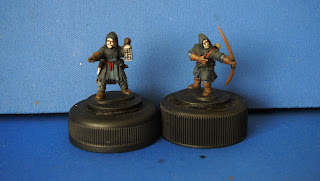 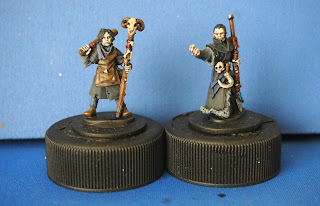 I am fairly happy as to the look of them but may need to highlight a bit more once the sealing has been done.

I have also started on a building which I had in mind for my Robin Hood Project but never got around to doing. It may be a bit too Fantasy for that though. The idea being that from one direction the building looks intact but from another it looks wrecked. 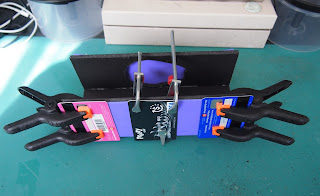 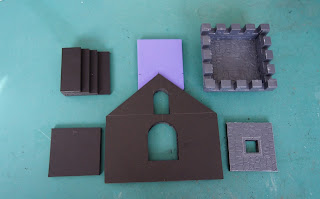 Whats on my table? Vietnam of course.

I have set up the Demo game as well as I could figure out where everything finished up. The left flank  was fairly well documented with photos and notes. The Main attack needed a bit of figuring out as I had not noted the amount of shock points or casualties taken in that area. However when I had packed everything away I had grouped the killed figures together which gave me a starting point.

So restarting at turn six things carried on as before with the main attack slowly moving forward while the left flank reformed to a defensive line. I played two turns but still did not get any more points for the Free World forces other than six killed VC. The VC also killed six but earned twelve points for their efforts. 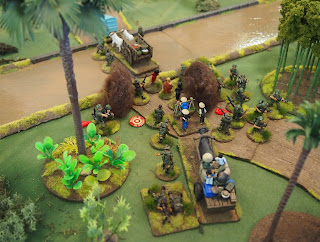 The civilians slowly making their way across the river. 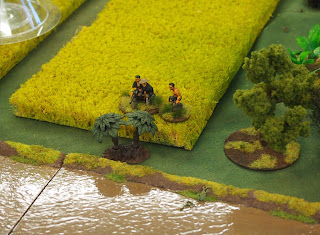 Repositioned MMG which did serious damage to to a section across the river. 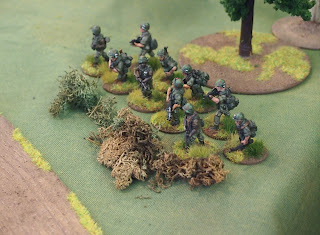 US 2nd platoon section three finally arrived and set up a defensive line. 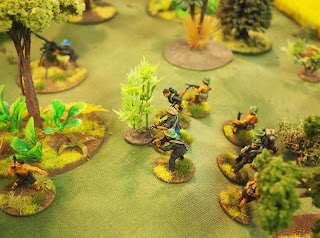 I allowed a destroyed VC section to come back on as reinforcements from the tunnel complex. 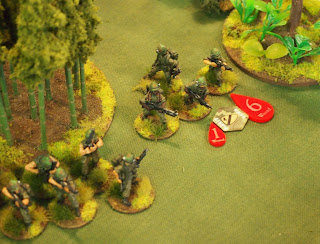 Taking heat from MMG fire as well as Infantry. 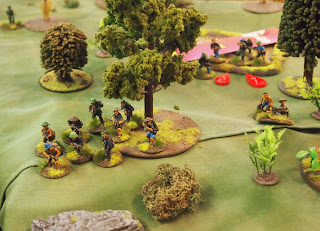 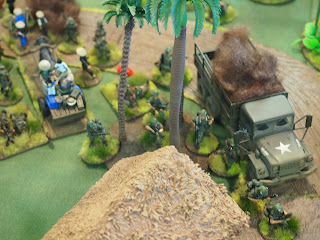 Platoon one section three finally making its way into the village with Flamethrower support. 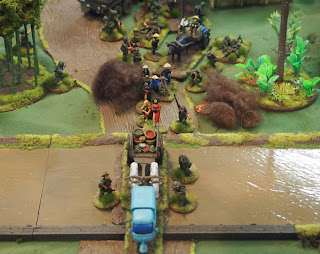 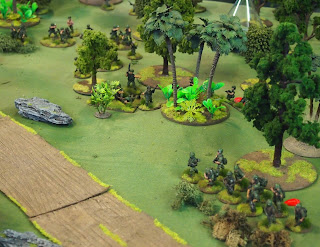 The reformed left flank protecting the Mortar position and HQ.
Posted by Daniel Wade at 00:32 1 comment: