Sod this for a game of Soldiers.

Don't worry I'm not giving up, its just the old phrase that I popped into my mind while trying to have a lie in. Since spring seems to have finally arrived its much brighter and warmer in my bedroom and hard to sleep past 7.30. So I was laying there thinking about things I should be doing and that I should finish my game of Bolt Action/Troops Weapons and Tactics. I started thinking about what it would be like from a Toy Soldiers point of view.......

Turn 3.
Sgt Trout tuns to his section "Steady boys, we are about to get the call to advance up the road". "Whats the plan Sgt?" says Plank.
"See that branch in the road up ahead, theres an 88 behind it giving our left flank Hell, we have orders to take it out".
"Can't the M10's take it out as there are two of them?"
"Well no" says Trout. "you see they ain't ordinary M10"s, they are Tamiya M10's which have been carefully hand built and spray painted by the Master. He won't just charge them up the valley to get shot up".
"Hang on" says Tout. "I hear something else clanking up in the field next to them. The tracks sound awfully loose."
"Its a Priest, that will sort the 88 out" says Plank.
"Nah" says Trout. "Its a Solido with no crew, won't hit anything".

"Sergeant' calls out Carrot, "Major Bradleys giving us the eye" I think he's trying to wave us forward but his arms are stuck to his sides". ""Don't worry about him, he's got a nice dry spot behind that Stone Wall, he won't cross the road". Says Trout.
"Whoomp" Whoomp" "Sounds like the M10's are having a shoot out with the 88". Remarks Plank.
"They missed" says Trout, "Probably because Master cut the crews legs off to fit them in the Turret and then gave them heads off other figures". "That must have hurt".
"At least we are all complete figures" adds carrot. "Mottly bunch though" says Trout. "Bolt Action, Black Tree and Artisan, no wonder we are all so disorganised."
"Not like those SS hiding in the house up ahead, special they are" says Plank. "I heard they are all Artisan and were painted in Hong Kong."
"Painting Service?" asks Carrot.
"No, Master took them on Holiday with him and borrowed his brothers reference books while he was there." replies Plank.

"Hold on" says Trout. "our turn now", "A TWO, the Master threw a TWO, we can only shuffle a bit up the road a bit. Must be our bases getting stuck to the muddy Road (Latex) since we've sat here for months".
"Yes, why does the Master not play with us more" asks Carrot?  'He keeps coming out here looking for stuff but not touching us"
"At least we have not been stuck in that metal box all Winter, those lucky Zulus and Brits have nice new plastic trays with foam to keep them warm". Replies Trout.
"Haha, bet he's forgotten them just like those Vietnam Era figures next to them" says Plank.
"No he keeps adding more Brits to the shelves and those Vietnam Figures had an outing last April" says Trout.
"You mean they actually left the building for a couple of Days?' asks Carrot. "Lucky Sods, its been years since we had a decent day out.".
Well we did have an outing last year for a couple of hours and beat up some Gerries for a bit of fun." says Trout.

Turn4
"Whoomp, pi-ttang, BOOM"
"Holy Moly' says Trout, looks like the Priest took out the 88"
"Those M10's should get moving now" says Carrot.
"Nah", says Trout there are still plenty of Panzerfausts around."

"Looks like those SS are getting Hell from the Paras on the left" observes White.
"Pretty solid Platoon those are, all bought together in a Platoon Pack and painted the same time" adds Carrot.
"Unheard of. painted the same time by the Master?". Sneers Plank.
"I heard he had a plan for a Demo that never happened" laughs White.
"At least the Paras have some support with those two Shermans" observes White.
" Well the lead one one is another Tamiya with an added Dozer Blade from Verlinden, so that won't be taking any risks".  Observes Trout.
"The one behind is a prepainted Corgi so why does it not rush up the road? asks White.
"Because since he bought it the prices on eBay have quadrupled so he won't want to get it scratched" replies Trout.
"He should sell it, and buy six replacements from Warlord for the same value?" observes Carrot.
Yes but the tankers complain that they are too small. They can't get their shoulders past the copula so they have to be either stuck inside or have their legs chopped off" relies Trout.

Well that was fun. I might do some more later when I have nothing to report modelling wise.

Email ThisBlogThis!Share to TwitterShare to FacebookShare to Pinterest
Labels: WWII

I really liked painting these figures. They are a mixed bunch mainly from Casting Room with one Perry Naval Officer and some Black Tree figures.

There are eight bases containing status dice for stress and death. The figure with the Black Dice I am thinking of using for tracking ammo if thats ever written into a scenario. He could be used the same as the other bases but think I should have enough of those already. 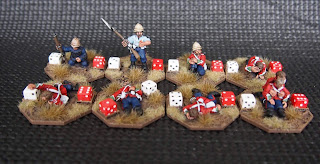 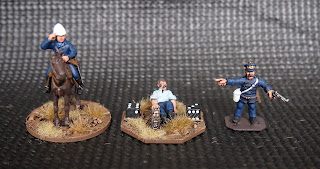 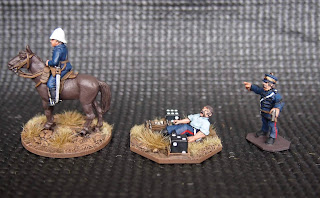 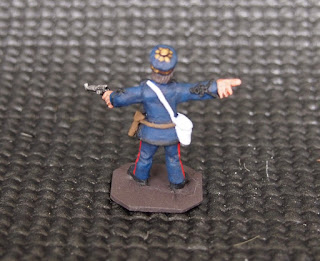 He looks like he's shouting "You there, put that down. You'll have some-ones eye out".
In best Monty Python fashion. 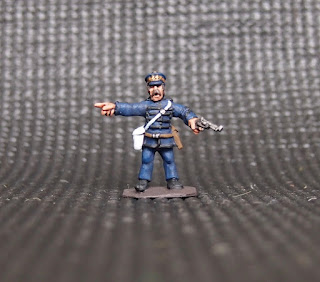 The casualty treatment diorama is just a bit of table filler like the two figures with the range markers. I am thinking of putting a dice with the casualty base now to keep track of turns. Hmm why didn't I think of that before? I keep thinking of the Cook as the Swedish Chef from the Muppets.

This has been a learning experience.

I bought this MDF kit at Call to Arms last month and have been working on it almost the whole time since. The kit comes as a pre-primed kit which has been laser cut after priming, so all the detail is burnt MDF colour. This is really useful for bringing out some details but I wanted to improve the look of the grouting/pointing. I first painted everything before assembly as I thought it would be easier to get to some places. (I usually fully assemble my cork tile houses first and the paint them which can be difficult). I also spray painted the interior with the same colour I used on my walls from the last post. I varnished the whole building with some house Varnish. The brush picked up burnt bits and spread these around just like I had planned to weather it. The pointing was done by shaving a pastel crayon which I had bought to try this on my Dads Army shops. (which I never got around to completing). The fine powder was mixed with some enamel thiner and then brushed on with a wide brush. When this was dry I wiped the excess off with a cloth and some White Spirits. It looks a bit patchy in places which is fine for weathering and realistic. However I felt the pastel is a little bit too bright. I mixed up some acrylic paint with some clean boiled water, Flat Medium and flow improver. The colours I used were Brown/Black and Green/Black from Atelier. (because it was cheap) It was hard to tell what the wash would turn out as the medium is very milky before mixing so I experimented a bit. I put the Brown over the whole of the Church and the Green mix around any corners. I'm not sure you can actually tell though. The grouting still looks a bit bright but I keep seeing buildings on TV and locally which look this bright so will leave it alone now other than matt Varnishing it.

The Windows were copied from a link on TMP which I had found the same week as I was building the Church. The round Window is exactly the correct pattern for this window but the side windows needed cutting up before sandwiching between the two halves.

The roof looked a bit plain now so I decided to order some laser cut Tiles from Charlie Fox Trot (as well as a Garage). These tiles went on really easily and came out quite nice. I think that they are a bit over scaled but ordered enough to do at least one of my Berlin Buildings.

The Church is quite large as you can see from the in game phots. I will use it for WW2 and Modern as my Buildings in these collections are large. It would actually do from Norman Times onwards. 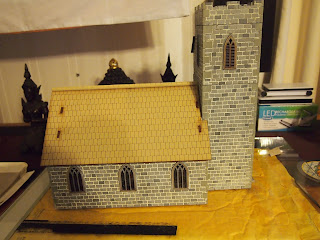 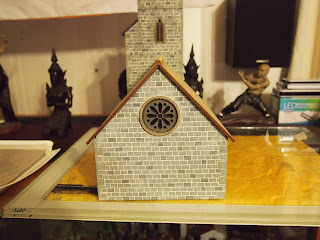 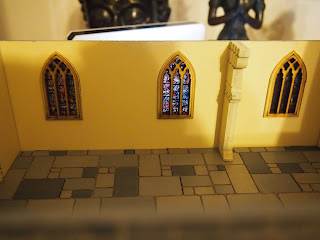 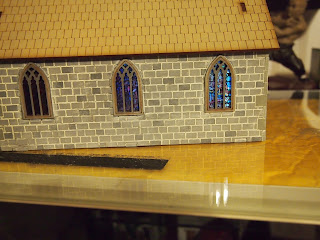 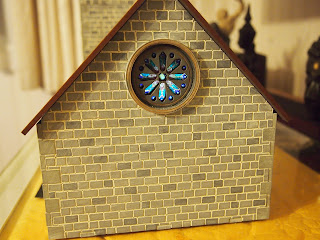 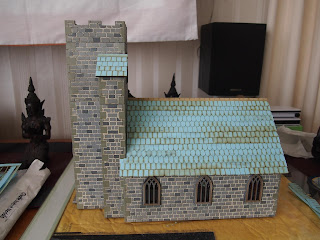 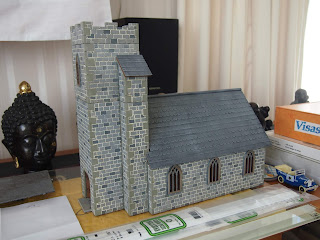 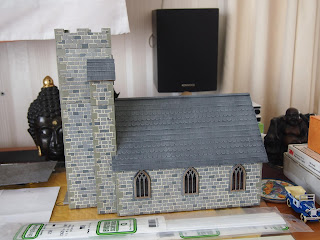 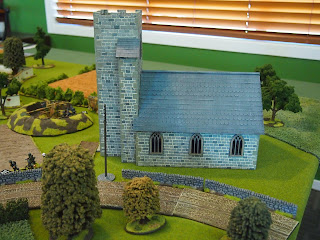 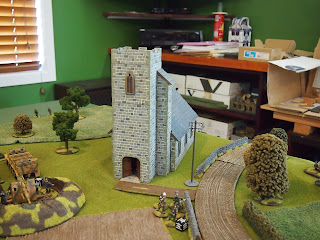 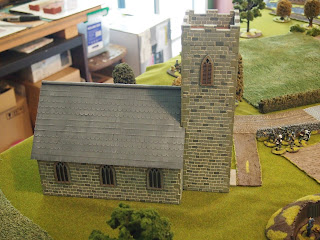