Company B Bulldozer and some US figures.

I bought the Company B bulldozer as there is nothing else available for Vietnam in this scale. It is a WW2 model but it was used by the Koreans so I thought it likely that the ARVN would likely have used them. The US seem to have used smaller Bulldozers but not this type from what I can see from my research.

I had issues getting all the parts from Company B which took about a month for them to supply the missing items. I still felt that things were missing so ended up using plastic disks and collars to mount the top end of the hydraulic arms to the link arms. The link arms were badly distorted so I had to cut up one of them into three parts to get them acceptable. Consulting the PDF from the site I found that I was supposed to mount the track units upside down!!! I instead followed some photos I found online and added two return rollers each side out of spare parts and scrap plastic. The driver I discarded as he was the size of an adolescent Asian boy and replaced him with a figure from Westwind. I did not glue this figure in as I can use a WW2 or Pulp type figure for other games. The Engine block was a work of art but some other items needed work to get them looking decent. The bonnet for instance needed a lot of sanding and filling as you could see the lines from the layers of plastic which were used to make the master. The tracks were all over the place so I covered them in dirt.  Turned out quite nice though after all the problems but I felt that I was back in the eighties. 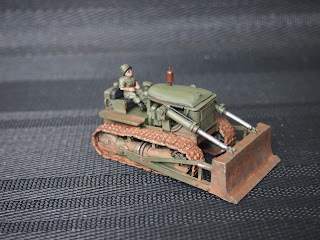 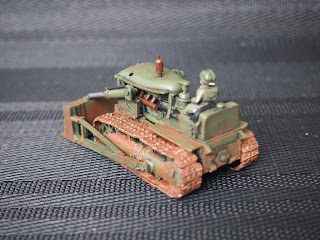 As I needed a Driver figure I also painted up some other figures to use as Engineers or to crew heavy weapons like the recoilless Rifle. I also painted up an extra sniper and TAGs version of Dennis Hopper as he appears in Apocalypse Now. A nice figure but not that accurate as he looks like a Hippy with all that hair. There are also a couple of extra seated figures to put into my Local Bar or a truck. 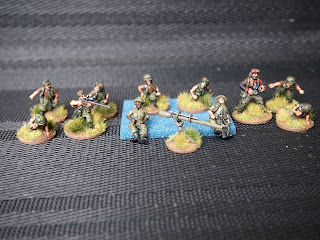 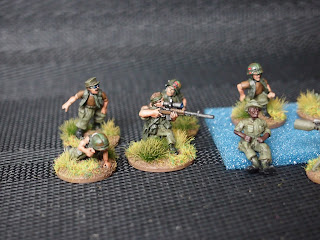 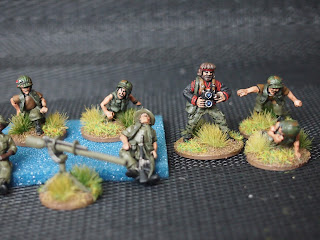 I assembled these models two summers ago. I'm pretty embarrassed about that as I always paint what I assemble, but with my partner moving in and building my games room they were put aside in a box and forgotten about. I am happy with how they turned out but and still thinking about marking them up. I need another two T34's at least and some other soft transport. I also bought a large bag of Elheim figures for this project over the Xmas break. The Armour is from Armourfast, the Soviet Jeeps are from S-model while the AA gun is from Zvezda. 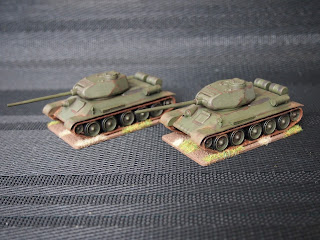 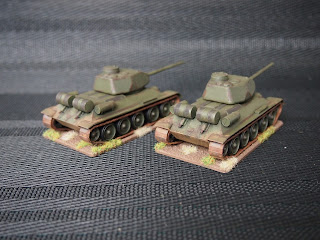 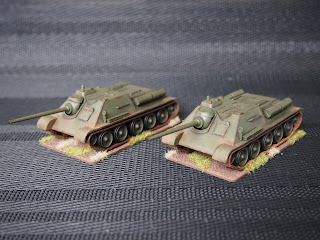 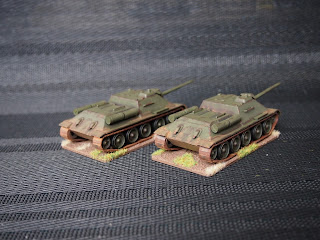 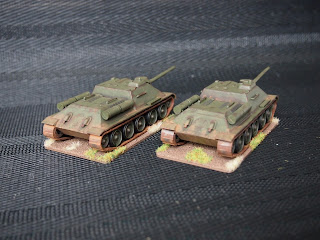 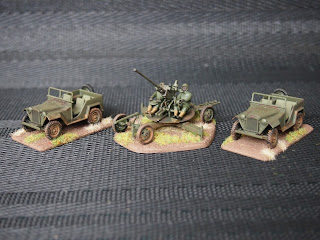 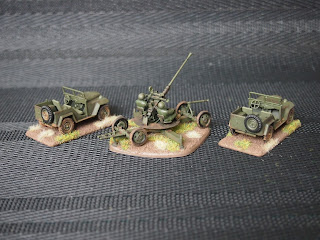 A bit of a catchup.

I seem to get very disorganised over the Christmas breaks as I usually take a few weeks off thinking that I can get work done around the house during the better weather. I also seem to think that I can take on an extra project for Wargaming. Well this year I achieved quite a bit around the house but fell short hobby wise.

This week I finished three different batches of painting and also found some photos of another batch of finished figures. Last night I found that there was nothing I could do on any painting project so started to assemble an M113 from TAG. I will space the posting of these completed items over the next couple of weeks.

I finished off a section of VC which will be used as either Local VC Hamlet defence or as Sappers, depending on the scenario. There are also a few figures to increase the strength of a couple of sections, plus a VC supply marker (TAG/Eureka) conversion. I did a few head and Hat swaps on these figures and also removed some equipment. These were the photos I found on my camera. 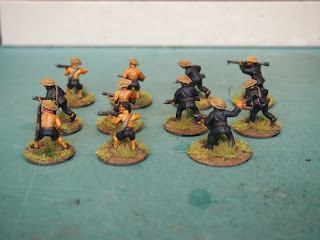 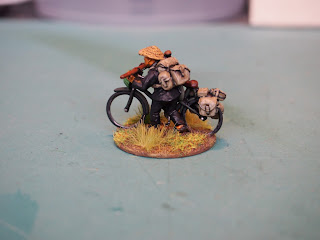 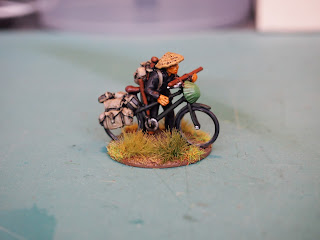 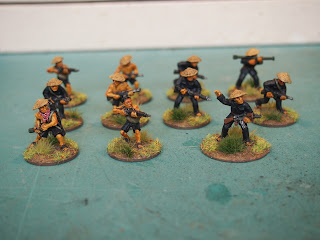 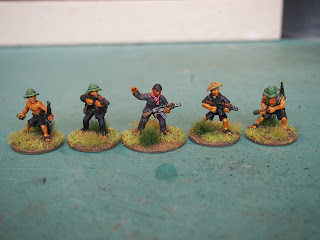 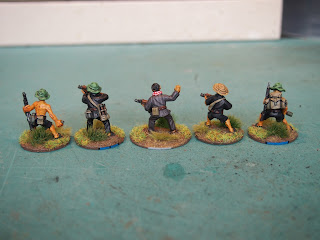 Just a quick note about how I undercoat figures and other items. Like most people I use Automotive Spray cans. In the past I either used some saw-stools or a card-board box to hold the figures while I sprayed them, but was unhappy with the mess and the restrictions that both these methods had.

When I moved into this house way back when, I collected some cardboard boxes and then flattened them out and pinned them to my garage wall. I then took some A4 paper boxes and cut them so I would have a right angle shelf which was then pinned to the other flattened boxes. These were mounted about shoulder high which gave me plenty of freedom to spray horizontal as well as from above and below. With figures I usually rotate them four times to get at them from four positions. Them being mounted on milk bottle tops makes it easy to move.

I recently had a skip in to clear my section so took the opportunity to throw away the cardboard which had a large amount of overspray on. This had the desired result of protecting the GIB board (dry wall). I then set about replacing the spraying area. Luckily I had a sheet of slightly damaged ply left over from building which went onto the wall. I then mounted a piece of timber on some spare shelf brackets that I had stored away. The centre support sticks out a bit longer which gives me a hole to hang items from. I'm pretty happy with the setup as it is a lot more sturdy than before and looks a lot cleaner (at this stage). 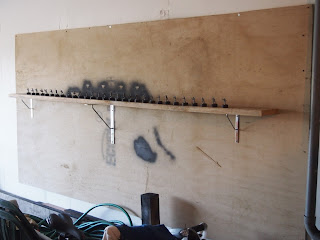 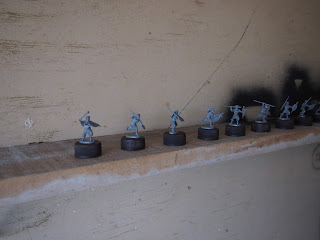 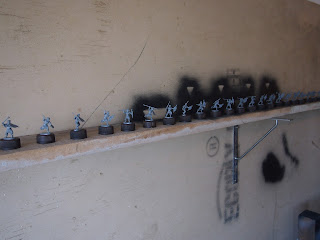 As you can see I am undercoating a whole regiment of Zulus at one go as the shelf is long enough to allow this. I will then base-coat these with a can of brown top-coat which worked out well with my last regiment.

Email ThisBlogThis!Share to TwitterShare to FacebookShare to Pinterest
Labels: WIP

I think I've left it a bit too long between painting Regiments as I made a mistake when doing the basing on these. I forgot to stir the Wood Stain which made the colour a shade of red which was not very pleasing. I then recovered the bases with the fully stirred stain in an attempt to hide the mistake. They were then still a bit on the red side so I tried to cover up by dry brushing a bit too heavily with the earth coloured paints. When I compared the bases with the other three regiments I found the basing was much lighter than the older ones.

However I figured that once I covered the bases with flock and grass tufts then the effect would not be as obvious. After I took the photos I broke open a couple of Army Painter grass tufts packets which I had been stockpiling and applied them to the bases of everything that I had finished so far.

I must say that I was really disappointed with how sparse the packets have become. The earlier packets I use for my Vietnam project seem to have many more tufts on the sheets. I tried to buy some more from several places but they seem to be either out of stock or out of production. I ordered some Gamers Grass from North Star to see if these are the same. These have not arrived yet. More photos after I do some flocking. 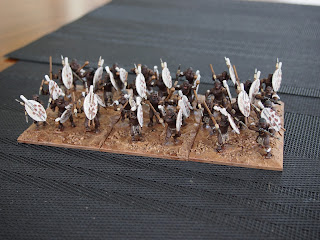 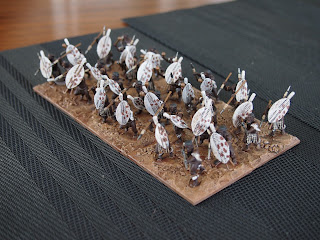 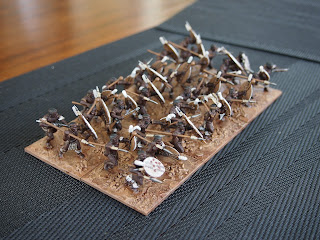