I have just about bought all the items that I have planned to buy, although there are items I'd love to have but are a bit too expensive for me to bid on at the moment. I may see if I can save some money for the big ticket items like a Flak Vest and some Jungle boots or even one of the packs worn in Vietnam, but I don't really need these items. I have just bought some Jungle Pants which are the only ones I've seen on Trademe in a year of looking. They are a bit worn and faded and look like they have just come out of a washing machine as they are all wrinkled up. I can now put on a full uniform for Vietnam but would have to wear Doc Marten boots. I've been looking for some Jungle boots but never seem to find the correct size. 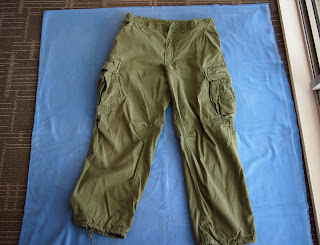 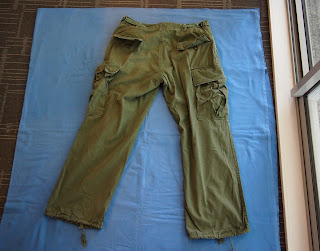 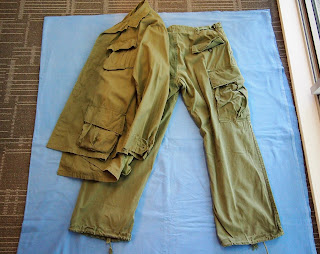 I have been looking for a decent Woodland Pattern Helmet cover for awhile and found one on Ebay from the mid eighties in very good condition. This is a cotton cover with all the correct markings on it. 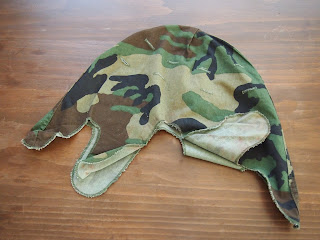 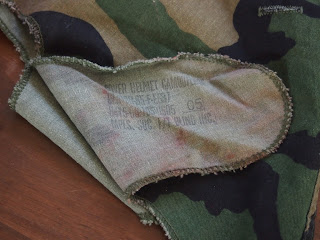 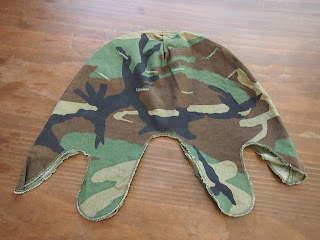 I also recently won a 65 Dated Helmet and liner from Trademe. I only realised that it is missing the headband when it arrived. I have stuck the Woodland cover on it and will look for a later dated Head band for it. 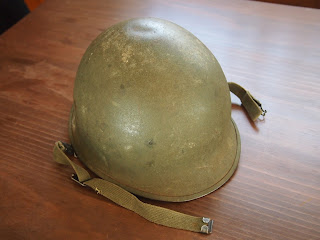 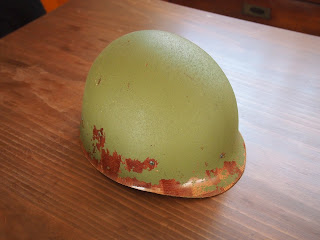 Feeling a bit grumpy today as I am trying to get an order from the Assault group sorted out.

Yesterday I posted on TMP to see if I could get a helpful response but got some well meaning answers and the usual "Salute" excuse. A suggestion to post on their Facebook page was a good idea. The message I posted is below.

Is anyone else having problems with their orders from the Assault Group?

On the 9/3/2016. I ordered six items of spare kit to dress up some ACAV's, a British mortar team to convert to Falklands era, and four packs of WW2 Ghurkas.
The order arrived on 7/4/2016 and found that I had been given Modern British instead of the Ghurkas, The spare bits had been double highlighted on the Packing slip but none of the figure packs had been checked off.
I immediately sent an email to Pete to advise that the order was about 35 percent wrong but have not had a reply.
A week later I sent an email to the address listed on the Website and another to Pete but have still not heard anything. I've only had really good service from TAG previously and have had good communications from them so am a bit puzzled as to what to do now.
Cheers
Dan

Salute is a one day show which I had been to several times when I lived in London during the Mid 80's. Going from the photo reports it has grown to a very large event.

However, that does not help me very much as I live on the other side of the World and rely on Mail Order to get my Models.

About 2006 I was painting up my Dads Army Project and needed some Tanks and transport. I had seen some models I liked from Chieftain Models and ordered a light Armoured Car, Matilda 1 and a truck. The order went through ok but was informed that there would be a delay because they were out of stock on some items and were waiting for the caster to catch up. About three months later I got the order with an early Stuart Mk1 as an apology for the delay.

After these models were completed I felt that I needed some Vickers light Tanks and A13's from the same source. I emailed ahead of time and made sure that they had in stock what was needed. I had a polite couple of emails and was advised that the Vickers were in stock but advised against buying the A13's as the molds were worn out. I then ordered and paid for three Vickers Tanks.

About a month later I was informed that my models (which I had paid for) had been taken to Salute and sold. There was then a couple of months wait for the caster to get through his backlog of orders and get my models ready. I was then sent the three Vickers and an Indian Pattern Armoured Car as compensation.

Now the Early Stuart and the Indian Pattern Armoured Car sat in a box for years tempting me to do something with them. I had no intention of starting a project just for them but wanted to paint them up. With the growth of Bolt Action I felt that making a small Indian Force would be a good way of using them without going the whole hog and buying a Japanese Force etc. I then filled out other orders buying up Indians from North Star and other supports from Warlord. I then wanted a squad of Ghurkas. The options were Warlord or TAG. I really like TAG figures and thought of getting some of their Japanese eventually. The Warlord boxed set had too many figures for what I wanted so settled on TAG.

Well, I received Modern British instead of the Ghurkas and am unable to get a response from TAG. Now I feel like throwing the whole project into the bin as its so obviously DOOMED to failure and would never get me the results on the table that would make up for all the hassle.

I have started selling off some Die-cast Vehicles and Aircraft that I cannot use on our local Trademe site which is a bit like Ebay but supposed to be NZ only. I am very tempted to put this project on it as well.

Good news is that the spare bits I got from TAG are being very useful to dress up the four ACAV's (from TAG), M577 and a Mortar Track. So stay tuned for a more positive post about them.

EDIT, I got hold of Pete through the Facebook page which got immediate attention with the promise to send the correct packets ASAP and with an apology. I hope my above comments were taken as tongue in cheek and light hearted humour.
Posted by Daniel Wade at 16:32 1 comment:

I am going Commando.

Lately I have visited Valleycon and then a Club day of the Regiment Wargames Club. There seems to be quite a bit of interest in Bolt Action so I thought that I would have a go at putting together an Army just in case I get organised enough to involve myself in a Competition. I have plenty of WWII figures and Tanks painted already but I'd rather keep these for private games as Competitions can be very hard on figures unless properly varnished and based.

The Commandos are mainly from The Wargames Foundry with a handful of Westwind, Crusader and Artisan figures to make up the numbers. I have used the list from the British supplement which means that no vehicles will be taken. That means no truck full of SMG armed Commandos that I have heard about being used.

I bought these figures to use with my Dads Army project but never got around to painting them up in time for the Demo we did. I had two ATRs in that game so have borrowed one of them for this which meant a little bit of repainting was required.

I was really pleased with how this was going until I varnished the figures. I first put a coat of Future Floor polish on the figures as there are rank chevrons on two of the figures, and I wanted to see the difference as I usually just matt Varnish. I then had to spray matt Varnish twice and then touch them up with matt Varnish by hand. The result was I lost just about all the highlighting that I had done. They should be well protected now at least and I might do some more highlighting on these when I do my next section. I was initially really pleased with the Assault pack but it now looks like I hadn't bothered at all. 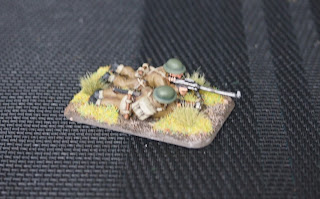 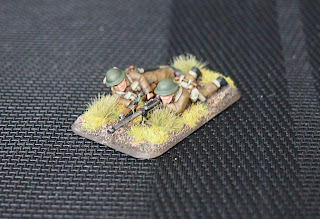 In a plastic box shop I found this divided container which is just the right size to hold a few figures. There is room to slip a magnetic sheet under the dividers as well. I will buy another two which should  be enough to hold this Army in. 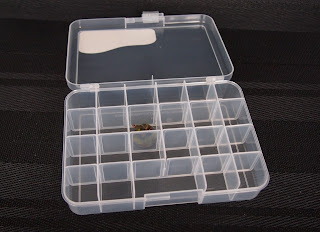 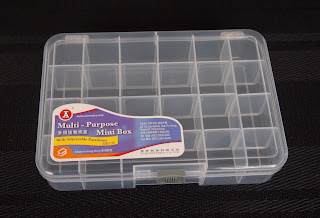