Battle of Nyezane at ValleyCon 2018

On the 22nd of January 1879 the Battle of Nyezane was fought between the British Coastal column and the Zulu forces under the command of Godide Kandlela. The British force had left its camp at 5am and shortly before 8am crossed the Inyezane river. Here they set up camp to have breakfast and to also let the Oxen graze and rest. Soon however the Zulu force approached from the North.

Since ValleyCon is held in late January every year we thought it would be a good idea to put a game on. I had not completed painting everything in my AZW Lead Pile to do the better known Battles I thought that this would be a suitable one to present. My buddy Tyrone had also started painting some British Sailors so that fitted in well with the Battle.

I really did not take many photos but enough to show the progress of the game. ValleyCon is held over two days but we had done enough on the first and decided to call it shortly before 5 o'clock that the Zulus would have won. I really don't think that this is a certainty but as we had not done a proper game of this before we did not really know if a Zulu Regiment could take out a British Line. We found that a NNC unit was no match for the Zulus.

Today on what would have been the second Day of the Comp, I play tested what would happen if a fresh British formation of two units was attacked by a Zulu Formation (Regiment) of two and a half units. After four rounds of Fisticuffs The Zulus were left with one and a bit units and the British were down to less than one. I threw dice three times each round of fighting and averaged the result.

The rules we were using was Sharp Practice so the Zulus were able to ignore the first rounds of the British Defence where they had more Dice and inflicted defeats of 2 and then 1 on the Zulus. The Zulus were able to keep fighting and then had other supporting units following on so I guess that would be realistic. However if the British were dug in like at Rorkes Drift I think that they would have prevailed over them. EDIT I just realised that I made a mistake with the quality, they are equal so the Zulus are more equal that I previously thought in hand to hand.

We liked the rules but as the Zulu War is outside the time period of the book we came up with some tweaks, some of which I found on the Facebook Group, some I had made up myself and yet more we came up with on the day. The next Demo we will put on should go a bit smoother. The only real issue we found was that Zulu Skirmishers seem to be pointless unless armed with Muskets, but we have come up with a tweak for that.

On the Wednesday before I had just completed my movement trays which worked really well, they assisted with transporting the figures and made moving the units very quick. I will write up the constructing of them another day. 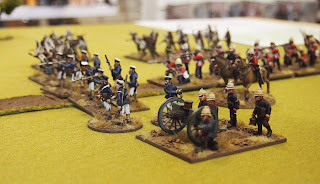 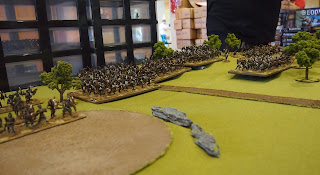 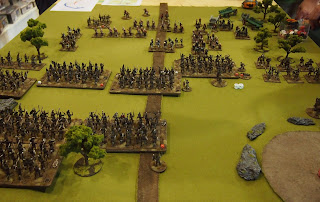 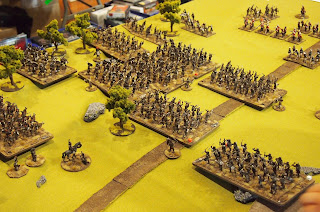 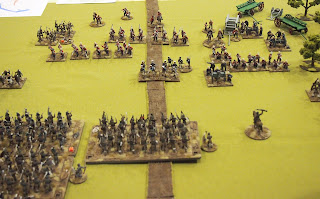 Since its been awhile that I have posted I thought I'd put a couple of photos up. Since I am about to base some Command figures for my AZW collection and will base the two unfinished figures shown here with them. I am not making much actual progress on anything at the moment as its too hot to sit down and paint.  I am also repainting the kitchen which is taking much longer then anticipated. I was thinking of getting a Tee Shirt made up that says "Sorry my Army is not fully painted for the Convention,  my Partner thinks the Kitchen is more important" Lol. Hope she does not read this.

First up a Night-gaunt and a wolf. The Night-gaunt is to go into my Cult Gang for Pulp Alley. From memory a Night-gaunt invades your dreams and tickles you. I have selected a couple of suitable stats for the rules which I have written down, somewhere. Wolf is to go with The Phantom as Devil but I have not decided if I want to buy some Pygmies to go with him for a gang, or use some British Soldiers instead? I have the Sergeants pack from Pulp so will probably go that route. The Night-gaunt was given to me with a load of other figures from the same range but had to be stripped first. I may dry brush some more flesh on the wings as I don't think it stands out enough. I am really pleased with Devil but he has not been sealed yet. 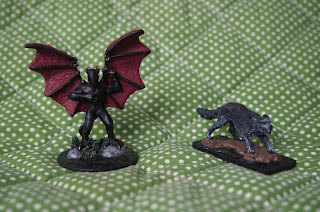 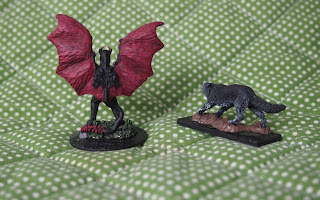 Tarzan, Jane and The Phantom are next. The first two were painted over ten years ago but I was not happy with them so stripped and repainted. I'm not that delighted with them this time either but they will do. I forgot again to fill the large gash in Jane's left shoulder this time around as well! I may use them with my Carrion Crew as Ugh the Jungle Boy and Leda played by Valerie Leon. The Phantom has a pin head which I nearly replaced but did not think it was worth the effort. He came out pretty well despite that, I think. 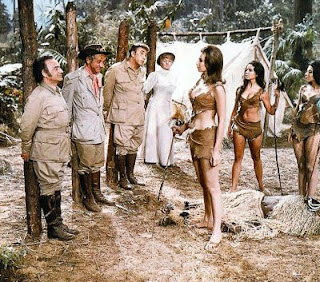 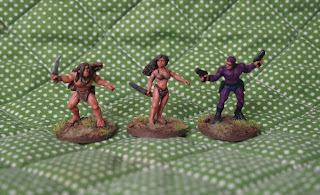 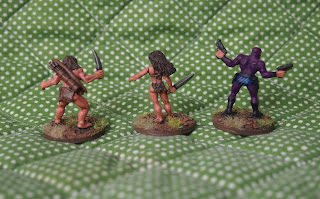