These figures were bought in a large order from Ebay which a mate and I shared years ago. On receiving my share I found that I didn't like these figures at all. The issue I had with them were that they had equipment in odd places and weird looking weapons. The sculpting of the heads and other proportions were also a bit odd.

With no use for them I made them into Zombies by drilling holes and doing other damage to them. I think they were only used in a game once as dismounted tank crews. So having some spare Bolt Action heads left over from my Bunker Crews (still on my workbench) I decided to strip, repair them and do some head swaps. One of them got an MG34. The Officer is from another bulk buy and is a WestWind figure. I did one base coat of Field Grey and still didn't like them. I then thought of painting them as Luftwaffe troops. I already have an 88, a 20mm Cannon and a quad with not enough troops to man them so these would be handy. They can also be used as 2nd class troops. 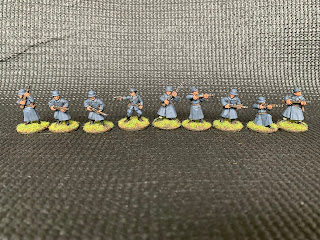 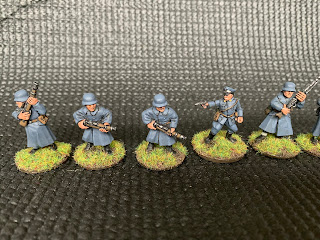 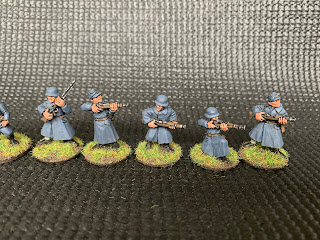 I have been playing Chain of Command but using the Cards I made up for Troops Weapons and Tactics for activation. I found this really good for Solo play.  One of the issues I found was that I have not enough US Paratroopers to make up a full Platoon. Looking around I found that Warlord Games also make Early Uniformed Paras, so hoped that they would look ok with my Black Tree Design figures. I ordered a Section Pack and a Pack 75. When they arrived I found that they had better detail and were a similar size to the BTD figures. I tried a paint job that was better and yet fitted in with the older figures. I may go back and repaint the Helmets on all the figures at some point as I was not really happy with the match or look. 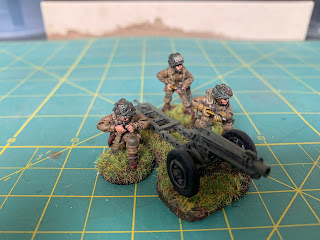 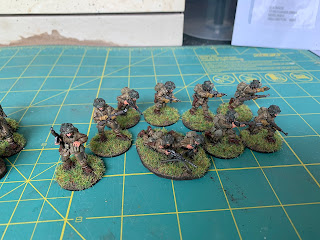 Of course there are too many SMG's so will use the left overs as HMG or Pack 75 crewmen.

The Tanks of Fury 2. Fury has been finished.

I cannot believe that it has been so long since I've updated the Blog. I guess I have been tweeting instead and thinking I've also Blogged the same things.

The last month I have been getting the windows, plus front and back doors in my house replaced with double glazing which has been stressful and taken up quite a bit of my time. Some issues are still to be sorted out.

The time I have had to work on Fury has been fleeting and I've also had new issues with the build that I have not experienced before. The first problem arose when I did the first coat of paint over the undercoat. The resin on the large tarpaulin reactivated and went all sticky. I left it alone for a week to see if it would firm up but it didn't. So I recoated it with Humbrol Enamel Undercoat which solved the issue. However once I had painted it and then put a wash over the paint it went sticky again. I cannot remember how I solved that the second time but it may have been another coat of paint. The next issue was the cotton I used to hold down the stowage went all hairy.  I spent some time trimming the hairy bits off. The next issue was that as my can of Army Painter antishine had run out I used a new can. Either this was not quite right or I held the can too close, or even put too much on. I found it was quite glossy and felt a bit sticky. Another much lighter coat solved this. I had almost finished it by this stage and decided to dirty it up. I have not really got the hang of this yet and did not get a very consistent result, but I think its ok.

In some spare time I also assembled Lucy Sue. Since I have just gotten my garage back from the builders I should be able to start to paint it soon. That is if I have time left over from painting my window frames. 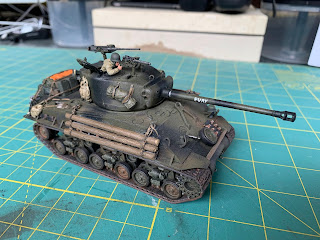 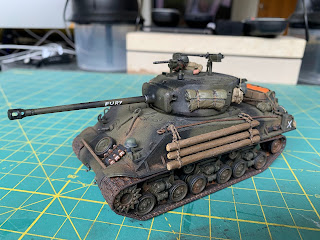 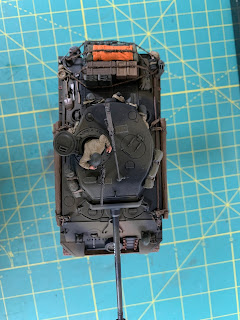 Not the offical Chenkov though as I don't like the figure very much. 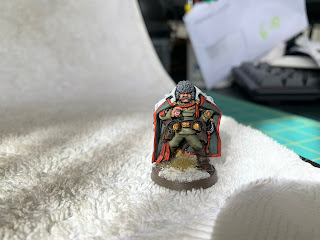 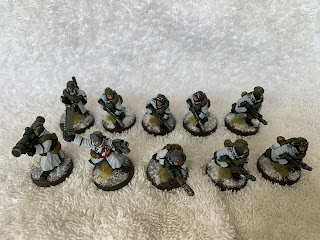 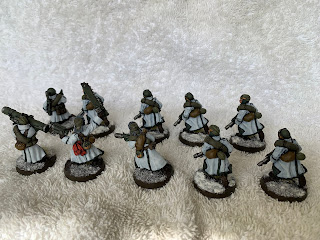 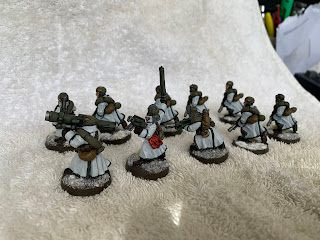 These were made out of water tanks from Water pistols. I added some doors and covered the cap with a vent. After painting I added some decals from Warlords Judge Dredd decal sheet. 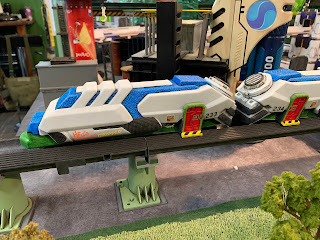 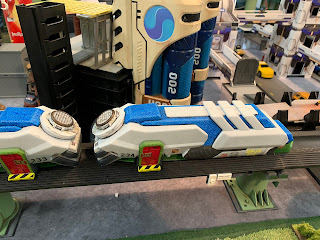 You may have seen this one before.

I was never happy with the finish as it looked too Dolls House picture perfect to me as I knew I had rushed it to get it on the table. So during lockdown I took it off the table where it was being used for a game and dirtied it up again and then did some dry brushing. The roof also looked too plain and boring so painted a pattern on it. I'm not sure this is any better but I will leave it now. 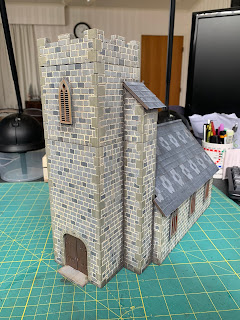 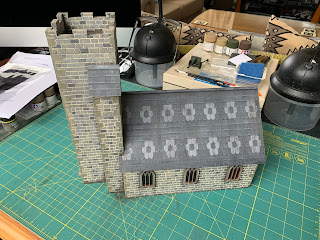 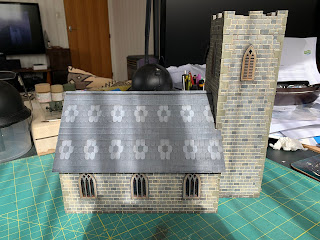 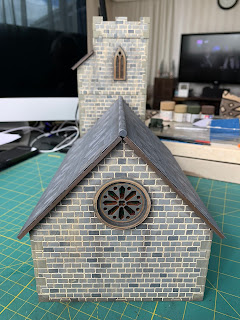 Oh dear I seem to neglected my Blog. I discovered that Twitter is really easy to post using photos taken directly from my iPhone, without messing around with my old camera it is so much easier. I will continue to Blog as I find it is a really useful tool for recording my Hobby and easy to go back and look things up. Twitter seems to be rather difficult in that respect, or maybe I just have not worked it out yet?

I needed to order some MDF bases for my DBMM Army and saw a couple of cheap bunkers on Mini Bits site so ordered one small and one large for WW2. However when they turned up they seemed to be better suited to 40k. I assembled the large one and then once dry I sawed the front off and rebuilt the Embrasures.  I then covered the MDF with some Hobby Basswood and also covered the roof in green foam. One side is designed to hold an AT Gun, in this case a Soviet 76mm and the other side a Wargames Foundry LMG on AA mount. The other Bunker will be getting a Black Tree Design HMG. 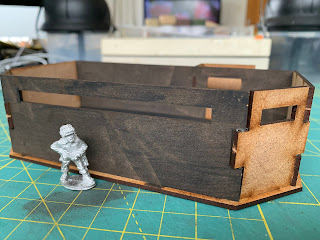 I'm really pleased how well this turned out. I have had plenty of time to work on it as we have been on Lockdown although I have had to work part time. 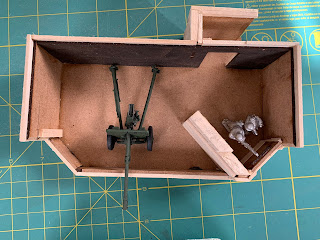 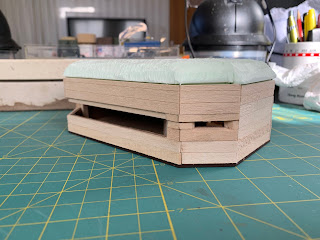 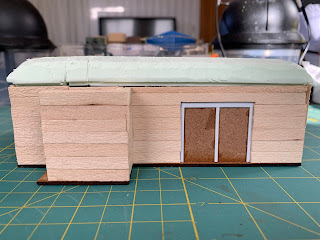 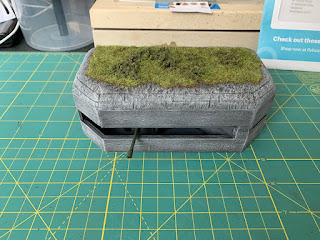 I will take more photos once I have painted the crew figures and made the other Bunker.