I really should be painting Celts.

I have another batch ready to undercoat but wanted to do something different. I decided that since I have just finished a Panther and a Tiger that I should add an American 76mm to my collection. Looking through my stock I discovered that I could do three of the Tanks from the Movie Fury.

Fury, an M4A3E8 from Tamiya. I think they actually used a Post War A2 in the Movie.

I'd also like to do Matador an M4 105mm HVSS which would have to be converted from a M4A3E8.

I have been painting Fury today with my Airbrush, but remembered halfway through that I should have left Black camouflage instead of coating it totally in Olive Drab. I guess I can go back and repaint the bands with a mix of Black and Olive Drab next session. The Black is really subtle so I wouldn't want it too dark. In some spare time I have also managed to assemble most of Lucy Sue. The most time spent on Fury was assembling the stowage. I had intended to get it as close as possible to the photos I found, so spent ages scratch building as much as I could. It's not exact but will give a close resemblance to the real thing.

I might be able to recreate some of the scenes from Fury using What a Tanker at some stage. 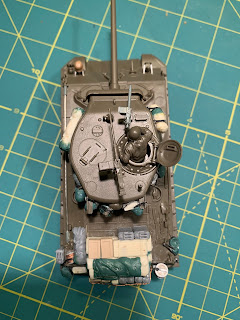 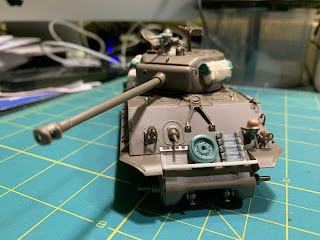 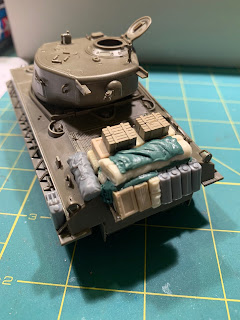 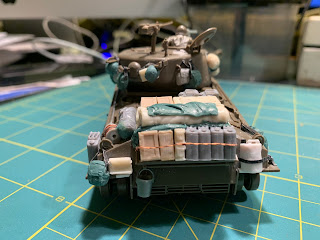 I had to laugh today as it is the first time that I have spray painted an M1 Helmet in 1/48th scale.