I picked these up ages ago with only a vague idea of what to do with them, but thought I'd be using them for my Future War games. I have made but not painted the Italeri Versions in 20mm for use in my Congo project and was able to compare these to get an idea of how to add some details which would make them suitable for Vietnam. These are not entirely correct but are close enough to game with. 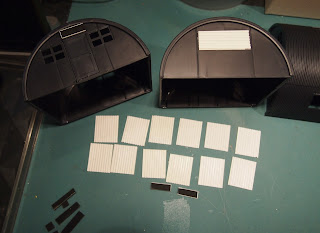 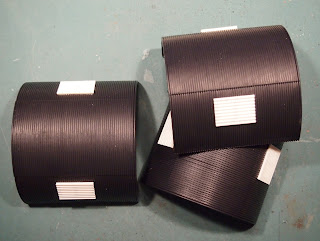 I added shutters over the windows and made up some Air conditioning vents by cutting up an old Tamiya Sherman engine deck. The units were left as single units so they could be used in either single, double or a full unit of three. Some of the units were fitted with a large garage type door which would be handy for more Modern games.

I had some Tamiya spray cans in a Dark and light Olive Drab which went over the black undercoat. After this dried I then dry brushed with Vallejo Brown Violet and Russian Uniform. I then used some Mig Vietnam dust around the bases and Water effect around the windows. (which can hardly be seen after Matt coating) 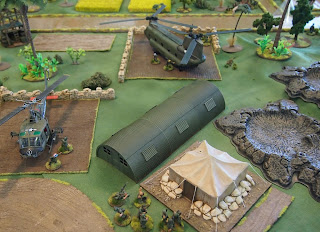 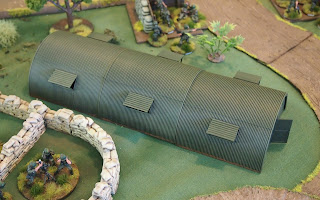 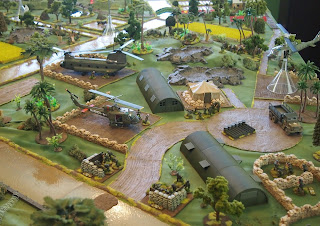 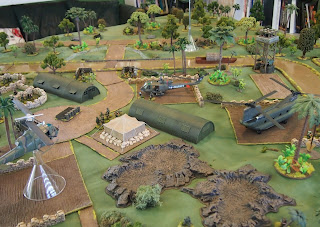 I have been following the discussions about Battle Fronts new Team Yankee game with interest. I downloaded the Novel to read again as I have not read it since it first came out. The first time I read it  I was really keen to play the PC game which was not much more than a Turkey shoot, although it was fun back then.

My issue with buying this in 15mm is that I am in the process of selling off all my 15mm Armies and terrain. I do have loads of 20mm WW2 terrain already and some more Modern buildings bought for my Congo project. I am still keen on doing a Warlord versus a Colonial Power in Africa project but may move some terrain to the West as it would be more suitable there. I am embarrassed to say that I have spent ages looking for my completed Congo vehicles but cannot find the box that contains them.

I will write more later when I have come up with something more substantial as I am just doing research about the setting. I am not an active Club gamer these days so whatever scale I get into will be played at home and I will have to provide both sides. 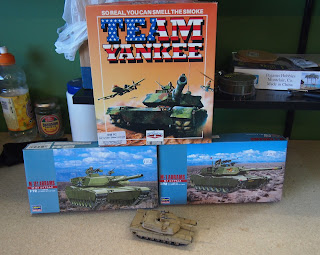 The Guild has some posts worth looking into.

I have looked at a few  recordings of games of European Escalation on Youtube.

Fulda Gap
Posted by Daniel Wade at 21:26 No comments:

The A Team (and friends).

After spending so long on doing my Vietnam project (which is still not complete) I felt like doing something a bit silly. I've been watching the A Team on TV for the last couple of months everyday when I get home from work, which has helped me wind down. Don't worry about me doing a Mary Taylor Moore project though, as that follows the A Team at which point I'm in the shower.

I have an idea for a game based on the TV series which needs a few figures painting. I can use some of my terrain so don't need to build anything else.

Theses figures are from Studio Miniatures which I am happy with. I lost the lighter layers of Hannibal's Jacket and Faces suit when I matt coated them so they could do with a touch up. I am really pleased with Murdoch but ended up doing BA's skin too dark but love the jumpsuit I gave him.

I also bought the Road Warrior and am happy with the paint job i gave him. The face is sculpted rather bland and needs a decent paint job to bring it out. 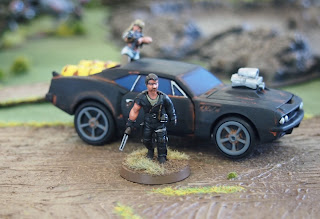 The Thing was shown on TV recently and I recognised this figure immediately. A very good sculpt. 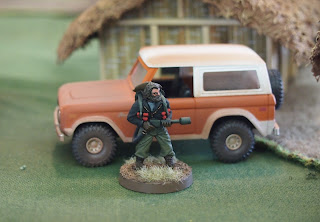 Uh-oh, looks like I am going to have to find a MacGyver figure as the A Team has just finished to be replaced by MacGyver!!!
Posted by Daniel Wade at 01:22 1 comment:

Email ThisBlogThis!Share to TwitterShare to FacebookShare to Pinterest
Labels: A team

I have finally gotten the scenario to a point where I can say that it is done. The US forces have taken the tunnel complex but have failed to find anything of interest (using the CDS chart). All VC resistance has ceased in the area of the farm on the Free Worlds right flank. Any VC on the left rear of the area has either withdrawn or has gone to ground. The Free World forces have only found one rice cache out of the suspected three, but has razed the Farm complex to the ground and removed the civilians from the area.

The game took three full days of gaming at home plus the two short days at the convention. I feel that the rules are not really designed for a game of this size so it would be unfair to judge them on that. I have been playing the last couple of sessions using dice to determine the units orders rather than using the cards. I will write these up once I have sorted out a couple of things that have been bothering me, such as the random events you get when using cards.

After the game I started to rearrange the table as if the Free World forces have been there for a week, and have been clearing trees to make space for Helicopter pads as well as other improvements. I also extended the playing area to give the VC some space to work in. More photos of that when I am happy with the set up. In the meantime here are the last photos of this scenario.


I had planned to bring a Bull Dozer by CH47 but only half of it arrived from the factory along with a midget Driver. The supplier said that they would sort out the problem with the missing parts. I intend to replace the driver with one from Westwind Productions pictured lower right, and use the Dozer Driver as a Vietnamese youth to drive a wagon.

The Dozer is a WWII D7 but I have seen these used by the Koreans in Vietnam and figure that the ARVN Army probably used these as well. I'd love to get a Rome Plough but have not found anything suitable yet. 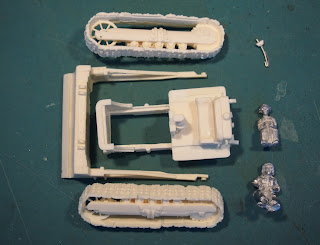