Today seems to be a day of disasters, nothing earth shattering just very annoying. If you can be bothered reading this there is some gaming related stuff down the end of my waffling.

It started after last weekends worst storm in 45 years. I lost power for two days so had to stay at my lady friends place. When I got home I found that I had lost a couple of small bushes, and one that was over a story high that was blown against a window so needed to come down. The worst thing I could complain about was it taking 24 hours to restart my Sky Box (actually Telstra service) which meant I missed watching two International Rugby games live. I found nothing else wrong at home.

Yesterday I worked outside using my chainsaw to cut up a fair bit of wood, and then washed the sea salt and other dirt off the north facing part of the house. Today I was feeling a bit stiff and almost felt that I had a migraine so instead of working outside in the 12 degree heat (which felt much warmer due to no cloud or wind) decided to do some work on my projects.

Went downstairs to turn on a heater in my games room (a converted garage) so I could do some varnishing. I picked up a paperback that had swollen to twice its normal size I found that I had a leak from the ranch slider which had wet the carpet. I then picked up my box of Egyptian and Vietnam bits and found it was wet through. Then I picked up my Old West box and found that to be a bit damp but no damage. I've emptied both boxes out to air with a dehumidifier. My two new tool cases which I had attached magnetic sheeting to were also a bit wet but everything else seems ok. I had been planning to put some old desks down there to get everything off the floor but alas I am too late.

I then went into the garage to spray some wicker fences with the brown can which had worked so well on my other buildings. This did not work on the cardboard bases and ran prompting me to wipe it off with a cloth and then resprayed with black undercoat.

I then picked up my extended bases that I had been undercoating for my Sargents. (whose bases do not work well on hilly terrain). I found that the left over stickers from my flags I used as masking did not come off, which meant I had to scrape them off with a knife.

It was with some trepidation that I picked up the can of GW Ard Stuff Varnish which has given me mixed results as far as matting goes. It is a very old can and has only the dregs left now but I prefer it to other varnishes that I have sprayed with. However I am happy to report that the latest batch of Robin Hood figures, a mixture of Monks and peasants has come out very matt and will be photographed once I have done the basing.

I'm pleased to say that my other buildings are looking good and have nearly finished all the Castle buildings and walls. I've only a month left before the Demo game so hope everything goes to plan.
Posted by Daniel Wade at 19:21 No comments:

Finished some more of the Sherifs Men.

Finally finished this batch and also made some flags to attach to a couple of finished figures. 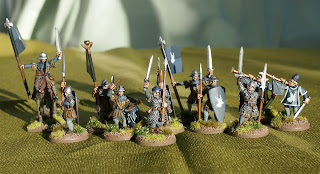 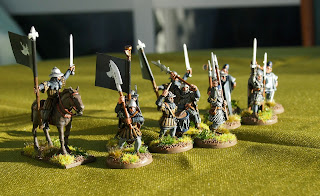 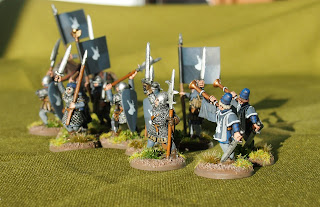 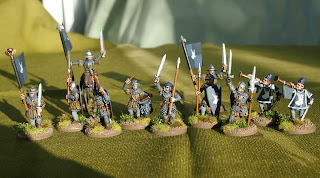 I also made a start on painting the Castle buildings. 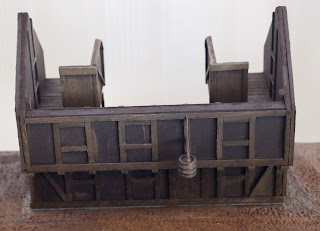 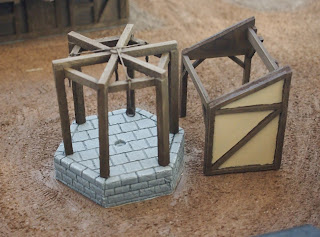 Some WIPs for the Castle

On Saturday a friend came around to playtest two scenarios which I had been working on. I'm really glad he did as we found some serious problems with my assumptions about the number of figures needed. I have been using an online LoTR calculator and had assumed that one mounted Soldier would equal two Merry men on foot. However its more like 1.5 to 1 which means that I have to paint some more figures in a hurry. We also rewrote the scenarios  as they would not work exactly the way I envisioned them to.

I'm still working on the Castle and managed to do drybrush two lighter colours of grey today. It still looks a bit, well dull. I hope the base will brighten it up a bit once the buildings and grass etc have been added.

I took a few photos of some WIP's before I started to undercoat them.
The Tavern has a new roof and I managed to make sure that it will back onto the stables so it can be used in another setting as one building. I just need to make a removable rear wall. I've also made a gallows which fits onto the stone platform in the courtyard. 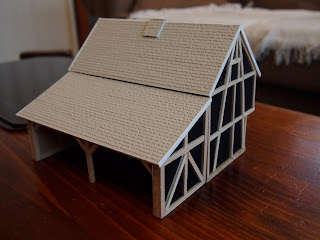 Since I have to clear my table to play Robin Hood, I thought I would take some photos of the terrain I have been working on for a Vietnam Demo I want to do next year. I have a Platoon of figures done for both sides already and most of the terrain so I could start playing games soon. The idea is to use three 6x4 tables and work my way up having objectives to take on the way. It should be fun and not likely to go to plan. This is the final table which I want to record so I can recreate later on. 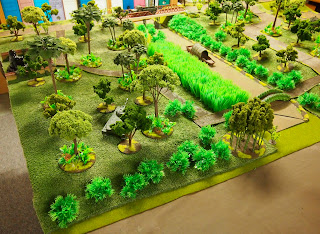 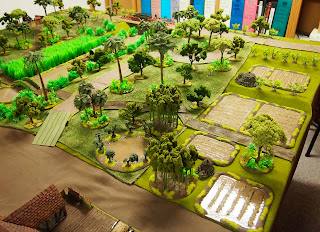 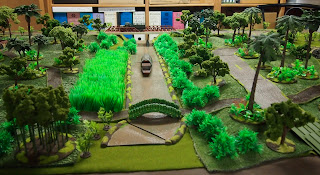 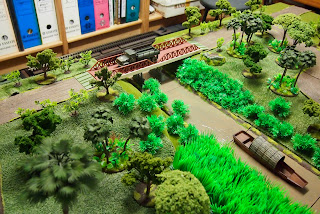 I've pulled everything out of my painting cabinet as I'm about to start play-testing some scenarios with a friend. So thought it would be a good time to take some photos. (I seem to be doing plenty of work but have not completed any batches of figures for a couple of weeks.) I have nine figures being based and another batch being undercoated at the moment, so will have something new to post next weekend. I really need to do my Black Knights and some mounted Merry Men to be on track for the Demo Game.

Please excuse my sense of humour but we have a new channel playing lots of old Brit Comedy shows which has brightened my day.

Ooh dear looks like things have gone a bit Panto.
Posted by Daniel Wade at 02:45 2 comments:

The weather has been a bit too cold for me to risk varnishing some figures so I thought I'd talk about the buildings I am thinking of using instead.

I had ordered a mix of 4Ground buildings but got a bit impatient at the weekend as I wanted to start play testing some scenarios. I have quite a few of the Conflix buildings which I feel would be ok for the ECW project I will start someday. Having put these out I now feel that they would work for Robin Hood as they look a bit modern and have a Hollywood feel to them. I know the chimneys are a bit too early but would anyone mind?
I then ordered some more building from Ebay.

I was also waiting for the 4Ground buildings so I could match my Tavern and other buildings to the same colour scheme but now think I should match the Conflix buildings instead. I guess if I had time I would build everything myself to a style that would be midway between each set of buildings.

Today my 4Ground buildings arrived so I am now having another rethink about styles.

I think this has been the most mind bending project I've ever been involved in but I guess thats why I'm enjoying it  so much.