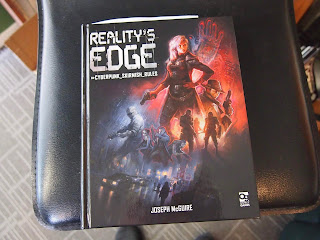 Oh so I have started something new, what a surprise?

Actually this is a logical progression for my Necromunda and Future Wars Collections.
I have fallen out of love with Necromunda and had stopped working on my Terrain for that as I really did not want to make everything I had collected rusty and wrecked looking. The idea was to get as many levels as possible but I did not want to have walkways with out any purpose like you see so often in some of the MDF setups for Necromunda.

I had always been looking for a good set of rules for my Future Wars figures which I suppose is Cyber Punk anyway. So far I have been reading the book which seems quite straight forward and simple to use. I will need to paint up some new items for this but as I bought some Sci-fi Robots from a Kickstarter I won't need to buy much. Vehicles may be harder to find however.

The table I set up for Necromunda has been sitting idle for awhile while I struggled with ideas and enthusiasm. However with the new set of rules I started to add some Cyber Punk type items like Mantic Sci-Fi doors and then added some buildings. I also took away items which looked out of place. I then added a few figures and took some photos. Much of what you see is still a work in progress and not likely to be finished anytime soon. I think it would be difficult to go bigger than a 6x4 table as access to some areas would be impossible. 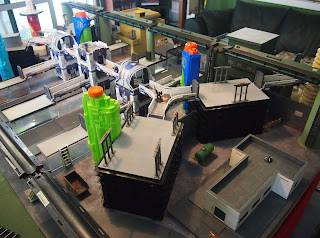 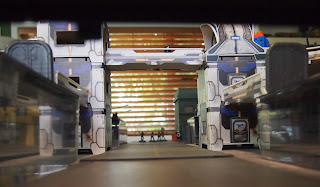 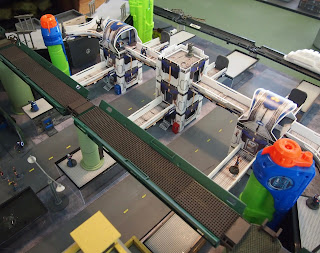 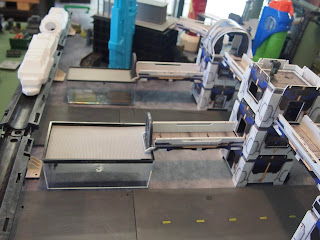 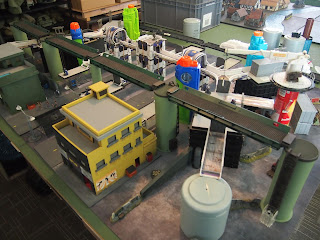 This Gang was quickly thrown together using mainly painted figures that have been painted for years. The Zombies were painted as I wanted to try out a few schemes for Zombie flesh before I tackled painting my Modern Zombie figures. It was also a group I'd always wanted to paint/convert anyway. They just needed a few touch ups and a few different washes. The Ghouls were done to flesh out my Modern Zombie horde quickly with a basic flesh tone, they only needed a wash for this Gang. The Dregs were painted as Zombies and only needed a head swap and a touch up. The Dire Wolf was part of my Frostgrave project and just needed the snow on the base Covering up. The Vampire was brand new in box which I had bought new in the shop decades ago. The only piece which I had to buy was the Necromancer which fitted in well with the other figures.

The theme for this was a little off the Wall. Unless you know much about New Zealand Politics it will go over your head. I had played around with a few ideas but coming up with suitable names to write down on the roster sheet was not happening until I came up with this theme. This is meant as a satirical take on our Government and not an attack.

First up the leader of the Gang Vampinda named after our PM.
I really struggled to photograph the depth of the red on her dress. 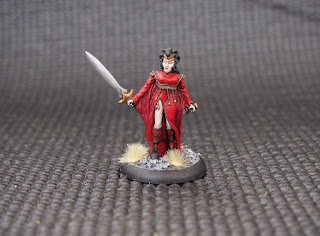 Next up her Deputy, Winston. I really tried to come up with a clever name for him, but Winston just fits so well. He is the Darling of the retired sector of our Nation. 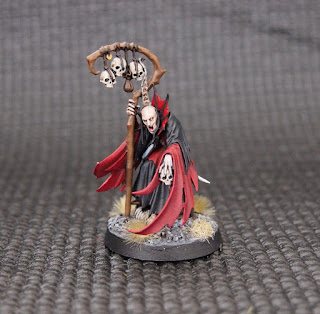 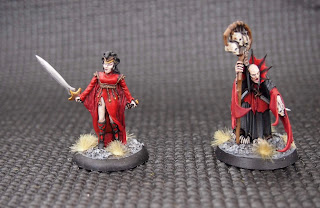 The Dregs (of Society) rent a Mob.
Hugh Givsa, Lilly the Pink, and Yorrick.
I followed a Woman down the road the other day who had Slagatha written on her top so I may rename Lilly that in future. 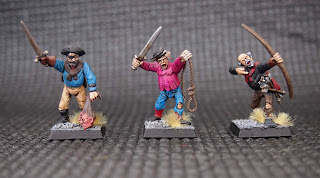 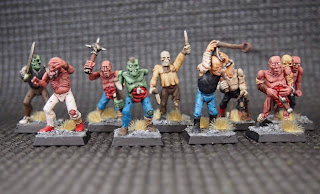 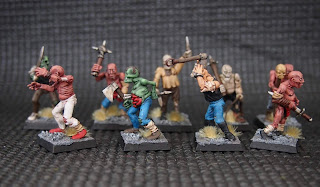 The Dire Wolf is called Grey Power after the retired communities power base. 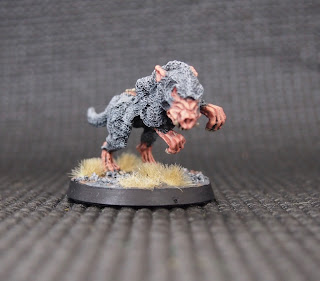 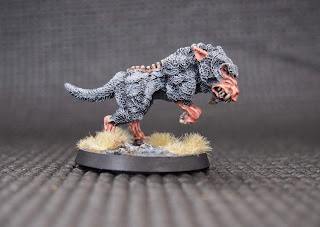 The Ghouls are called "The Union of the Ghouls" no doubt after the Flesh of the fat ruling classes. 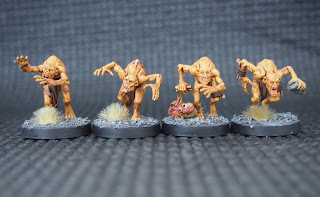 I am thinking of doing the opposition as a Midheimer Gang as they are the rich powerful ones?
Not sure I want to go spending money on them so see what I have in my pile first.

I have finished my Wizards Tower. It needed a base so I dug out a cardboard Cake base which is sealed on one side and cut it to size. (this had been sitting in my Games room for years awaiting such an occasion). However it had a slight warp in it which only got worse and as the cut edges spread out I decided to use it as a template to cut out a 3mm MDF base. This I had bought in A3 size from the Art shop for a few dollars. When cutting it down I remembered someone on a Forum saying they make their terrain to fit into A4 Paper boxes for storage. I then made sure that this new base was smaller than A4 and grabbed a spare box from work. I also finished the Chimney and painted two Candles and a Torch. I really wanted to add more details inside which I have from Reaper but that would reduce the playing area too much. 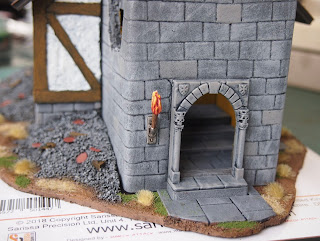 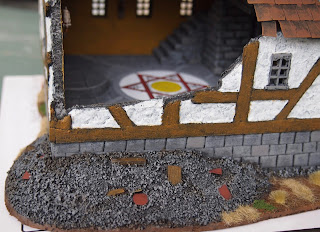 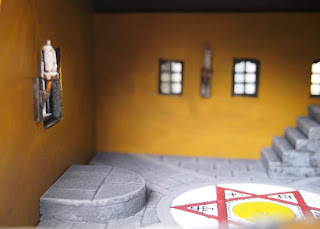 One of the things that had been holding me up on the Berlin board was making debris piles. I grabbed some cut off Foam-core and made a couple of piles which were then covered in filler and spare bits. These came up quite good but I think I will add some Sculptaclay recommended by Lukes APS. I will still use the Foam-core to save some weight though. I think I still need to work on my method of adding grass etc as it looks a bit neat like some gardener had laid it out.

I had some fun this afternoon seeing what other settings the building could be used for. 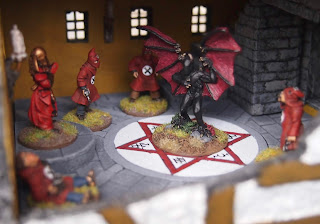 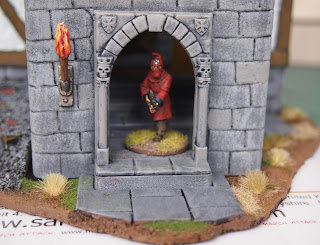 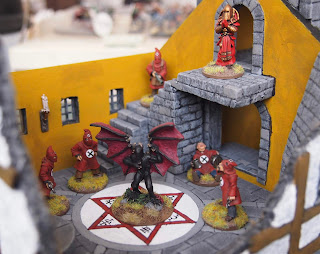 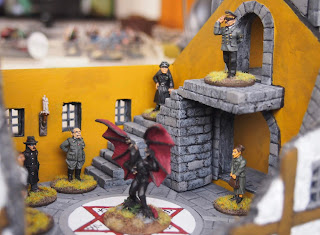 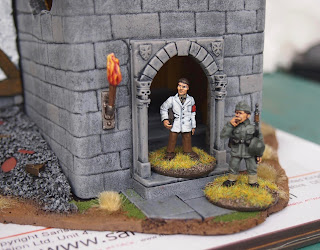 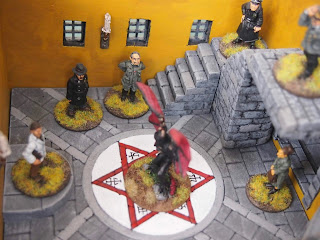 The terrain that I have for Mordheim at the moment. I have three more of the 4Ground buildings to make up and I need to remove or cover the snow from the GW ruins. I also have a bridge hidden away in a box somewhere for the river crossing. 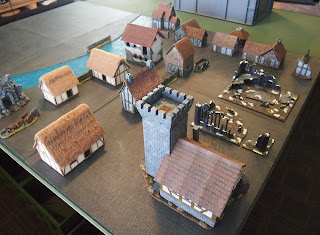