I think some mention of how I came to possess such a large number of Imperial Guard figures would be a good place to start. I have never been a 40k player but have been interested in the Universe and the obvious amount of thought that had gone into it. I have a large amount of Sisters of Battle figures and have sold off an Ork Army many years ago, but other than a couple of games I had not really played 40k. Once I had enough Sisters figures I started to collect Imperial Guard. I managed to get hold of large amounts of Valhallans and Catachans. I also bought quite a few Praetorians and Mordians on sale but as these were out of production I eventually sold them off as I did not get enough to make an army of either. I then started collecting 28mm WW2, BOB and Cowboys as these were being played at the club, so the 40k collections got pushed aside. I did however keep picking up second hand Valhallans when I saw them for sale here and there.

Recently a friend (Tyrone) and I each watched Luke of Lukes APS video about him painting a Praetorian Army, which sparked a conversation. Some time later Tyrone was in possession of my pile of Catachans and I had a pile of cash and some 4Ground buildings. (I was never going to have time to paint two Imperial Guard Armies) Then Tyrone suggested a Holiday challenge which would be two sections and a HQ. I think the way this is going its going to be a Summer challenge as the figures I have are quite complex and I want to do a really good job on them.

So the obvious question is "what colour scheme or theme for them?"

My original plan was WW2 Soviets, but I have painted plenty of 15 and 28mm Soviets so then thought Stalingrad Germans. Since then I have painted many 28mm Germans so that idea was binned as well. After that I painted my WW1 French so thought Horizon Blue and paint the Tanks in a suitable French Camouflage. However Wargames Atlantic have produced some nice Late War French which I like so the search was back on. Some Googling later and I found a photo of a Leopard Tank in Winter Camouflage which interested me. 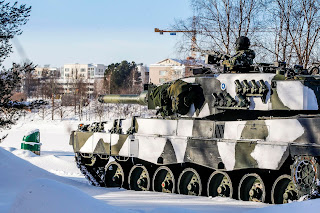 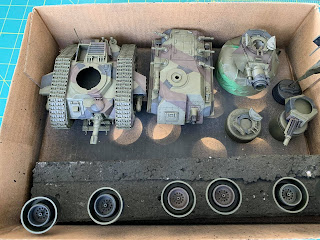 A slight modification of the Tank scheme later and I decided to do Winter Valhallans largely Soviet based but as they have dress elements in the way of Epaulettes, sashes and breastplates a nod to the Imperial Russian look would be in order. 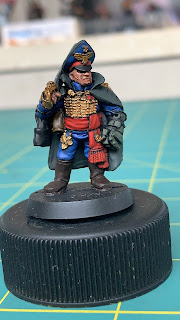 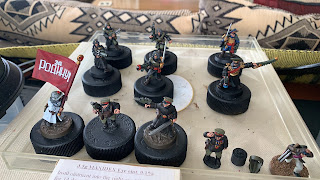 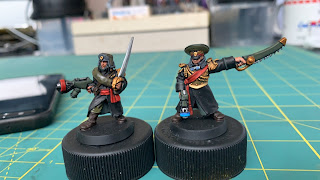 These are WIP photos as I had not touched up after using washes nor have I started on the white overcoats. You may notice the Copplestone figures which I used as practice figures to work out some colour choices. Two of the figures will be used as Tank Commanders.
Tyrone is doing the normal Catachan paint job as far as I can tell. These are also very much a WIP shot so will update later. We live about 90 minutes away from each other so I can't just pop over for a photo shoot. Tyrone has also been buying up some Mordians but the majority of the Army will be the plastic Catachans. 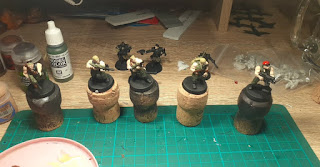