I have not managed to do much for the most of this week as I had a bump on the head at work. I had trouble remembering things I'd just done so I did not feel much like painting. On Saturday I did manage to put some paint on some figures which felt like hard work so I did not accomplish much. I am returning to work on Monday so hope things go well.

The M113's have had paint and weathering powders applied and then I assembled the crew, guns etc. I am painting some passengers and equipment at the moment so hopefully will be able to assemble everything by next Sunday fingers crossed. I have not decided about marking them up yet.

The spare equipment was superglued onto thin plastic card to make handling and painting easier. 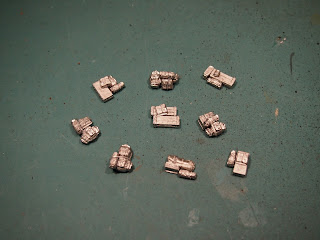 All six M113's together. The TAG versions are now obviously bigger than the others when side by side so I will try and use them separately on the table. The M577 will be used as a FDC track rather than a Hq track and the Mortar track will be back with the other Mortars most of the time. 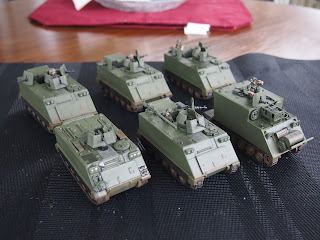 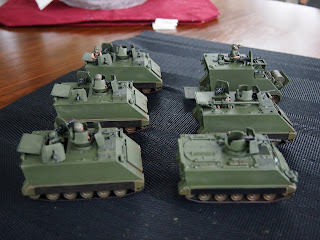 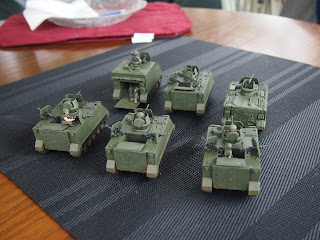 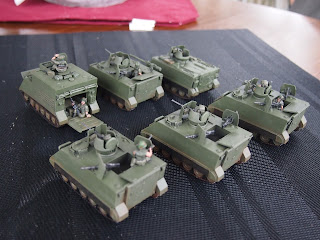 I have just completed my second section of Commandos. These are mainly Foundry figures with two Westwind figures thrown into the mix. 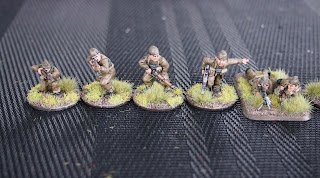 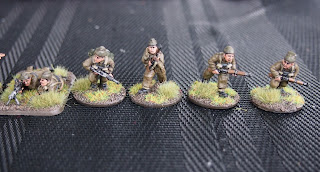 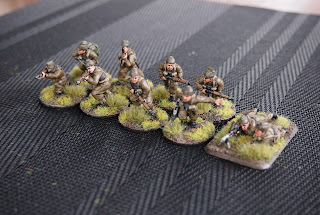 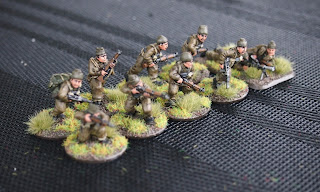 The weather has been horrendous all weekend so here is a hint on what I spent some of my time doing while stuck indoors. 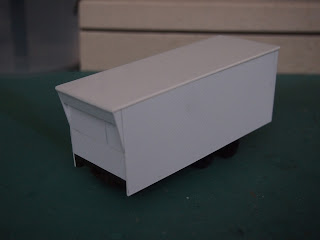 Had an amusing moment yesterday while throwing some dice around with Charlie Don't Surf.

First let me explain that I have been unable to finish off my latest batch of Commandos, and my M113's needed the lower half's varnishing to fix the weathering powders. The weather has been very cold, wet and windy so my garage is unsuitable to do this in right now. I instead put a heater on in my games room to warm it up for this purpose and thought I'd might as well play a bit of my ongoing CDS game.

I had left the game with the VC holding the South end of the river where the new bridge was just being finished by some engineers. The VC had taken out the bunkers and had the M48 suppressed with MMG's and Mortars which had not had a chance to do anything. He then destroyed the tank with an RPG. The Bulldozer driver had been taken out by a sniper and I then drew the critical wound card which pinned the remaining engineers.

A fresh squad of FNG's were just entering the North end of the Bridge when I pulled out the Human Wave card from the deck. I had used this card several times previously with very little success. This time however I had three full squads of VC and two half squads with Commissars and Officers all within six inches of each other, all lined up at the bridge entrance.

The first squad hit the FNG's hard killing half and making the rest run away. The second squad finished off the remaining engineers. Then everyone else piled on to the bridge with nothing between them and the HQ tent and mortar platoon. (Just a Sergeant was left but he cannot do anything by himself.)

At this point I had done a bit of clear coating and the fumes were getting too much for me. So I had to open all the windows a crack and leave the room for a few hours. I went back in this morning to set up for another round of clear coating and will try and throw a few dice to see if the base is overrun and lost to the US forces. However I had managed to move two squads with command etc from the other end of the table in a Chinook who may just be able to save the day. Or the M113's could be ready next weekend to come on and disrupt the VC attack.

I have learnt a lesson about having listening posts set out from the bridge and having someone higher in Command capable of rallying the Tank. I also really need another platoon on each side for a game this size. 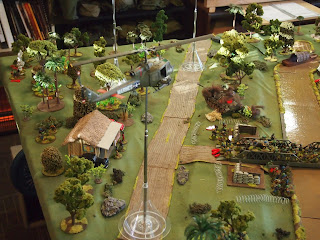 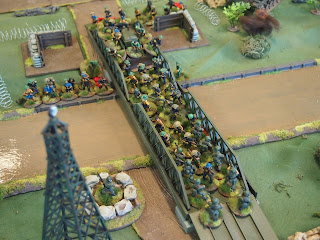 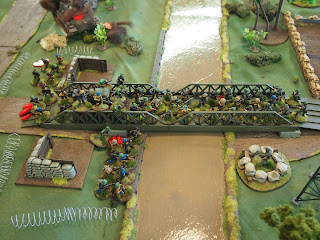 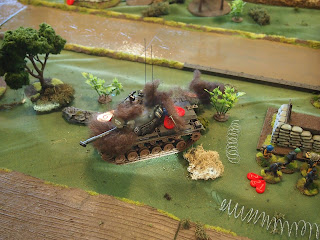 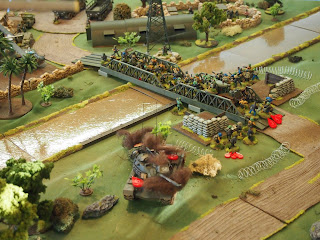