I was going to claim that this was the quickest paint job ever as this was just a repaint. However it did not work out that way but was still done in about half the time that it would have done from scratch. These were originally painted as Foreign Legion for Pulp games painted in Khaki. I knew the uniforms would be incorrect but it was in a Pulp setting so did not worry me too much. It turned out that they were used once for a game of Contemptible Little Armies and once in a Pulp setting against my Tomb Kings Army and had lain unused for about ten years. A friend has bought some Early War Germans so I thought I'd repaint these which meant that caps, trousers, coats, leather equipment, water bottles all needed a repaint. I left the flesh as is and painted wood grain onto the rifles using the older dark brown as a base. I had some problems with taking the photos as the blue turned out really light and did not look like the paint jobs. I eventually used a white background but did not have enough light so had to lighten them in Photoshop. I might have to invest in a Light Box set up soon.

I have ordered some figures from the Northstar Artisan range to fill out the units. These figures are rather large and out of production so I could have some issues matching them. The Great War figures are a little smaller so I would put them in different units should I need more. I intend getting the Cavalry and Artillery from Great War at this stage and have also found some prone figures sculpted by Steve Barber which I may get as another squad.

The first photos I showed to a mate prompted him to call them "Ultra Marines"! 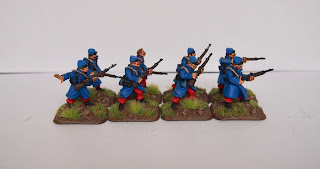 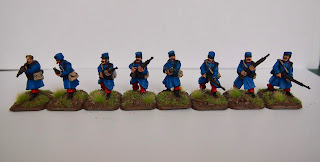 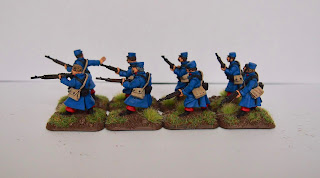 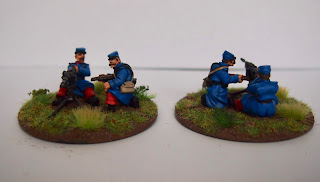 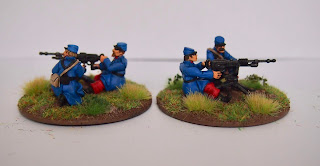 Command Squads in Red Caps. The far right figure will Command the Colonial Troops when they arrive. 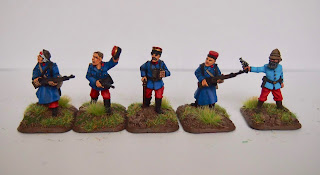 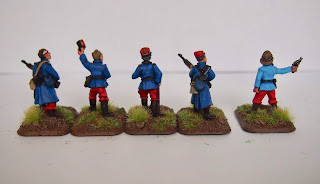 7TV - I love it when a plan comes together.

A fellow Club member Grant and I had a go at 7TV last weekend. I was running late as I had forgotten about the game so just grabbed my figures and ran to the Club rooms. Grant had already set up some terrain borrowed from the Club and was all set to go. The rules were owned by Grant but he had not gamed with them. I had played one game years ago when I downloaded the Zombie TV rules. As Grant was all set to go we had to hurriedly organise some cards for my gang. I had forgotten my camera so used my cellphone to take a few pictures.

The scenario taken at random tasked my gang "The A Team" with exiting a table edge directly opposite the one I was to enter on. I chose to put Amy (bystander) into the Van as a Driver followed by Hannibal (Military Mind) and BA (Body Guard). Face (Dependable Deputy) and Murdoch (Technician) were to try and cross the table on foot. I figured that it would not be fair to Grant to load everyone into the Van and just drive across the table, and we would not learn much either that way.

I don't remember everything or have the rules so the opening act went something like this.
The important points to note were that the Van made it across the table ok while the occupants took pot shots at Grants Leader (A Super Hero wannabe) and his dog. Grant was able to use a card that allowed him to move a building into the Vans path as a continuity error (that was very humorous). Meanwhile Grants Ninja fought Face and Murdoch a few rounds and then the Leader and his Dog took them prisoner. Grant did not use his activation points on the other three members of his team and spent them on the others to keep the action moving along. This is very different to most other rules. 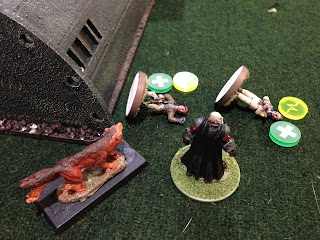 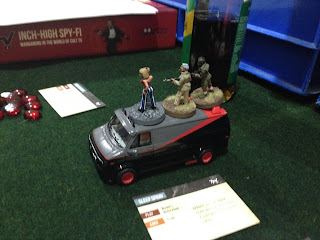 The second act was a lot of fun for me.
The two prisoners were holed up in a building in the centre of the table and my job was to break them out. Grant had to guard just about the whole table to prevent me. As I was down to three members of my gang I was able to recruit some Skin Heads as cheap thugs. I drove to the building, stopped to let someone plant a bomb and then reversed back 6 inches to let the bomb go off. One of Grants members was killed (a Technician I think) and we sprang the prisoners out. The Van was first disabled and then destroyed by Grants gunfire but everyone was able to make their way off the table. One stunned Skinhead had to be carried. I think the Ninja was also stunned attempting to stop the A Team getting away. I did wonder that if Grant had chosen to steal the scene at some point then the game could have turned out very different. 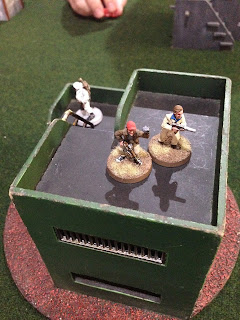 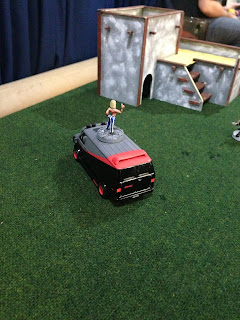 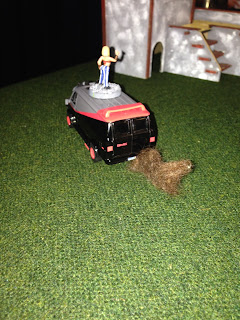 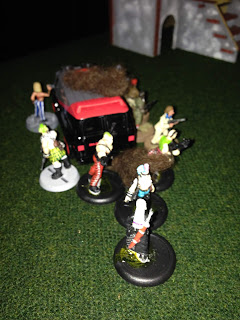 The way the activation works is that some figures are able to activate other members so there is usually enough points to go around to move and do other things. Fighting can churn though the points though as you can add them to give you more dice.

I think there should have been a final act but will have to check the rules next time we play.
(Edit. Grant informed me that the final act was the drawing of the finale cards)

The games moved very quickly and were loads of fun so am looking forward to having another go with them. I also wonder if I they should replace my current Pulp rules when that version comes out.

The game was just like an Episode of "The A Team" which is I think the aim of the rules. 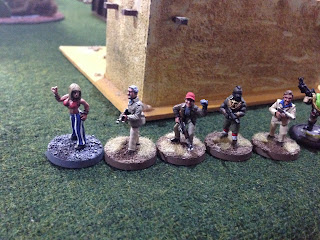 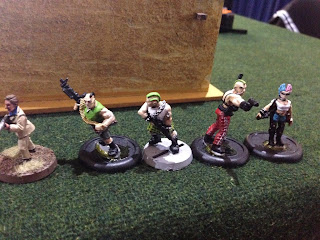 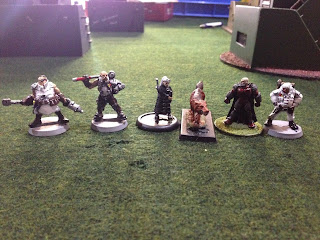 Email ThisBlogThis!Share to TwitterShare to FacebookShare to Pinterest
Labels: 7TV

I needed a few figures to fill out my encampment and also wanted smaller based Command figures if I am to play Rorkes Drift. The figures are a mixture of Empress, Casting Room, Black Tree and one Foundry figure. They mix quite well despite the different sculpt styles.

First up a Foundry Darkest Africa Explorer with some Casting Room figures. 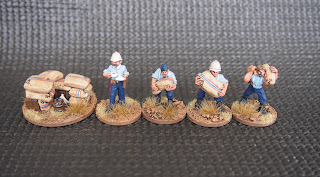 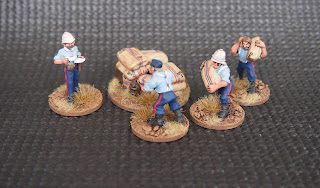 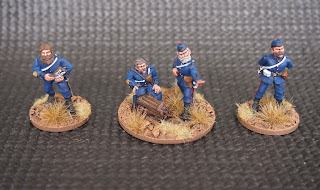 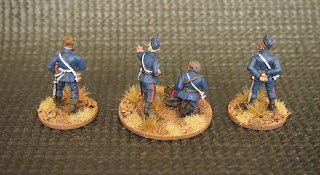 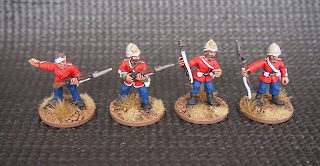 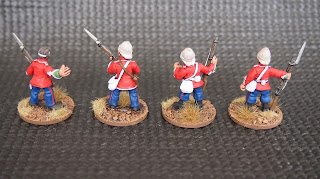 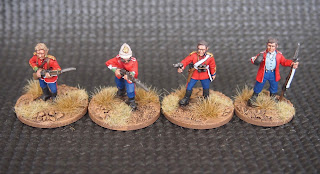 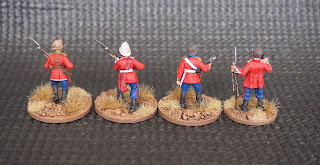 Comparison shots of Empress verses Casting Room versions of Lt Bromhead and Sgt Bourne. I gave the Casting Room Bromhead a new head, in case you were wondering. It would be interesting to see how the Historical version Perries fit in size wise. Much closer to Black Tree Designs height but thinner I'd imagine. 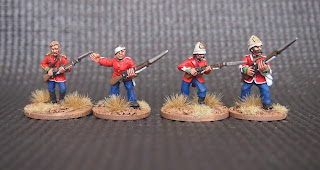 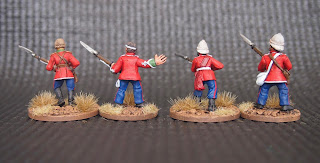