Just a quick note to say that a few friends came around for the first proper game in my room. Michael and Ray Hutcheson who I have played with for years took the part of the Americans. Colin Phillips of Radio Dishdash publishing Wargames rules took the VC, while I umpired. The game was just a continuation of my ongoing Vietnam Campaign which ended in a Minor victory for the Americans.

Some parts of the game seemed to struggle along which we felt was due to the unpredictability of the movement, giving me some thoughts on some House Rules for them. Much hilarity was had when the US dropped some Napalm on the hill containing the tunnel system. So much damage was done that we thought that it should be a once a game occurance. It also meant that the US could not advance for three turns over the bombed area.


I did not take any photos of the game but my partner took a couple on her iPad. 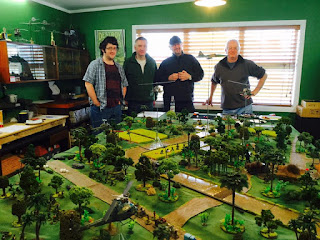 These are my ideas for House Rules for movement. I have highlighted the changes.
We (I) also forgot to use the modifiers which would have further slowed down the game.

Note. Impossible terrain no move for all types.

While sitting having a coffee and a Sandwich on Saturday afternoon I noticed how well the natural light made these figures look on the workbench, so took some photos. I had not intended posting WIP photos of these as they are just about finished with some snow needing to be added. Being disappointed with my previous photos I thought the chance was too good to pass by.

I was given a bag of various Monsters at a gaming convention several years ago so have not identified everything yet with still plenty to be painted up. The Ogre is one I bought from GW and kept getting it out of the Lead pile, but had no idea of what to paint it up for until Frostgrave came along. The Ape looking Monster looks like something out of Star Trek or Lost in Space (the old series) but have not found out who made it. The Dire Wolf is from GW which I also bought and is a very nice model (ditto the Ogre) which seem much better than some of the current releases.
The white looking Ghost is from Copplestone which I painted years ago. I tried to lighten it up but think I will have to base paint it grey and start over. I based it to suit the other models. The other ghost is a Grenadier figure which painted up really well after stripping off the original enamel paint. It is surprisingly well sculpted for an early figure. The giant worm thing on legs is also from Grenadier. I also had to strip the original paint off but felt that more detail was needed on the worm parts as it was really difficult to get the texture to look right. I should go back and add wrinkles to the bulges but spent so long on it already that I don't think it will happen anytime soon.
I also painted a small Dragon to go with my Chinese Tong for IHMN, but it was already in the display cabinet so forgot to photograph it.

I thought that these early figures were from Bob Murch but now know that Andrew Chernak sculpted most of them. Buy them if you can as they have many uses for gaming. 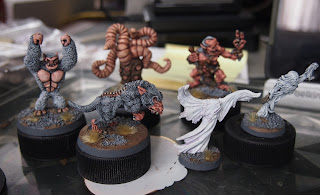 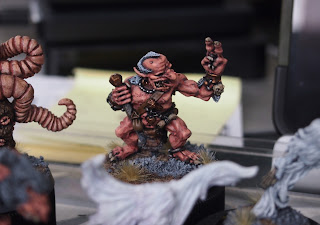 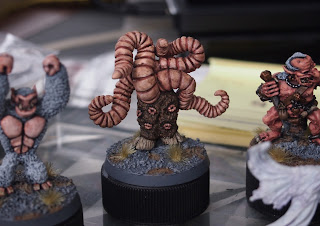 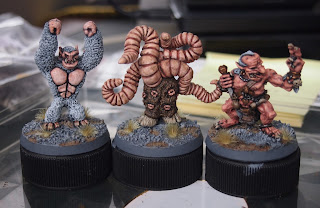 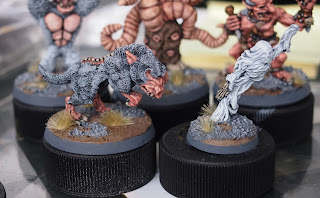 Email ThisBlogThis!Share to TwitterShare to FacebookShare to Pinterest
Labels: Frostgrave

Lately I have been collecting a few vehicles for various games.

First up a few Solido Vehicles bought in a job lot. The Stalwart can go in my Dr Who game I intend to paint. The PT76 will go in my Vietnam collection as I have another already. The M3 Halftrack will go into my Soviet WW2 force as my Americans have two already with four Corgi versions. 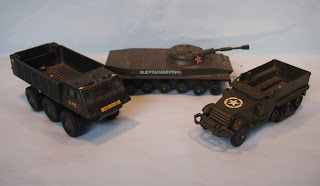 This Hummer or is it a HumVee? I was not certain about scale wise so bought just one in a local shop. When I got home I measured it at about 1/50th scale so went and bought two more. 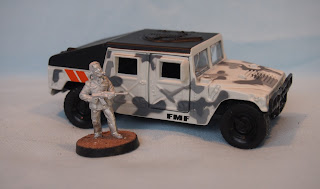 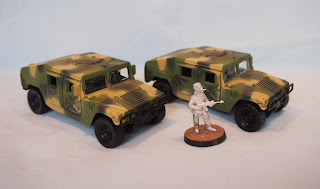 I also bought this M113 which had a Giant sized 50cal on it which was removed. I measured it  against my unmade TAG versions and found that it was almost the same size. It is actually a M106 which is handy as I did not buy one when West Wind made them. I think I will just put a decent 50cal on and repaint it. I might get another two but that might be overkill for 28mm games. 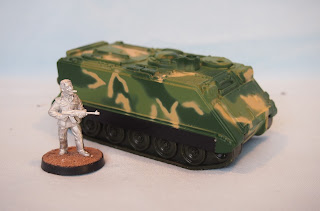 I bought this 1/50th Corgi A team Van on Ebay for a reasonable price. It arrived a few days after my A team figures arrived which I hope to use for Zombie games. 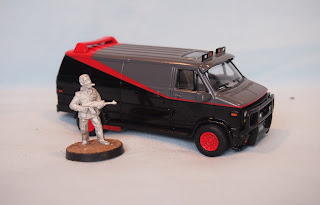 I've often seen Submarines in toy shops which always look too small for 28mm games. However I think that this is just right and just needs water lining and a new conning tower added. I can fit three figures on the decks easily. I should be able to use it from Pulp era to Vietnam (I think). 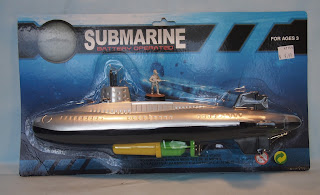