I have had these two Foundry limbers in my stockpile for ages but wish that I had the new versions from Perry. The horses on these are very nice but the riders have a few issues, namely their size. They are from the Boer War range so I had to remove the pockets and hide the puttees. I also tried to file down the Puggarees on the hats which made them look like Coppers. I then ordered some spare heads from Empress which worked well. They have longer necks which also made the figures look a bit taller. The originals had sunken heads which did not look right to me. I don't know if the limbers are of the correct type but they will work ok. The guns were assembled with the barrels from the Black Tree Guns I did earlier as I felt the barrels looked better on the others carriages. I also swapped the wheels from the limbers to the guns and left the axles free to move on the guns so they could be limbered or not.

My Camera battery died after taking the first four photos and of course the light had changed by the time I had recharged it. 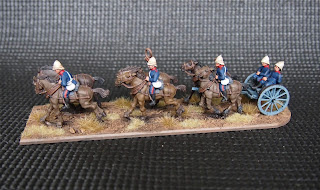 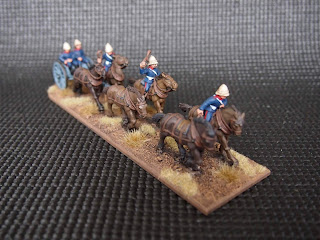 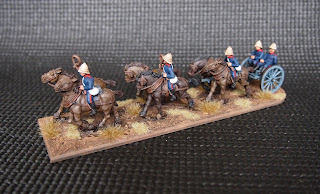 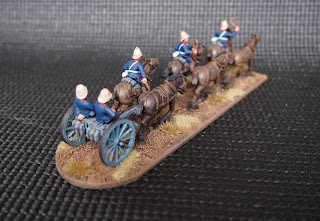 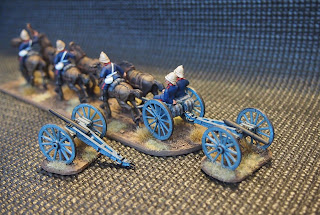 Next up is an old Hinchcliff ammo wagon of Napoleonic age. It was missing its wheels so I used some MDF ones to complete it. It is a little small and intend to use it with the Gatling Gun I did earlier . 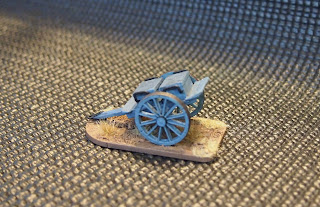 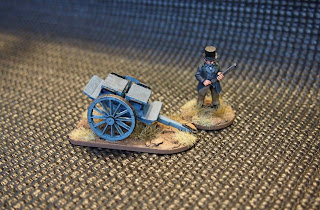 This cart is from Casting Room Miniatures which has been assembled about four times and pulled apart again as I did not like it. This time I converted it into a Horse pulled Cart by lowering the body and adding some struts to attach to the horse. I also added the load of Trade Muskets. The Figure is an old Foundry one as is the horse. 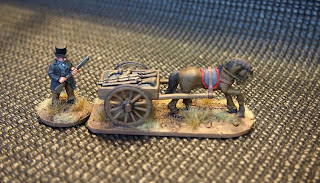 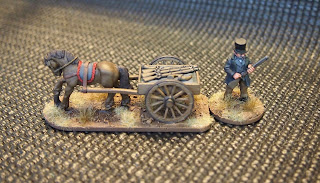 I spent quite a bit of effort trying to highlight the horses. I am afraid that the varnish did its usual job of killing the highlights. The horse do look good but I think next time I will add white to the mix rather than the Iraqi sand which I was using. 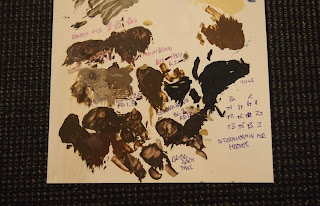