I bought a pack of Great War French Infantry to see how they compared to the Renegade figures I have already painted. My initial conclusion was that they are really too different to fit in the same units. Its not just that they are quite slim but also they are a very different style. I attempted to try and hide the slimness by adding Greenstuff to the Kepis and Greatcoat tails. I also added backpacks to most of them which came from some Artisan packets. However the thinness of the guns compared to the Renegade figures are really evident. After basing the figures I thought that the kneeling figures are very difficult to spot the difference so I bought a set of the HMG so I can add a couple of figures to the bases I have already painted up. These have been undercoated with the eight second hand Renegade figures I have stripped and are ready to paint.

The figure below on the right hand side is a Renegade figure. 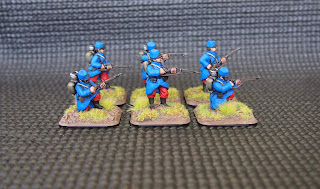 Last weekend I went to ValleyCon which is a yearly event put on by the Hutt Wargames Club. It is a decent sized affair and was as far as I can tell consisted of Competition Games and no Demo games so I did not take any photos. I did however talk to a Club-mate about taking up DBM. To my surprise he invited me to take command of one of his Generals of a Spanish Army. It was a really good game and I learnt quite a lot but I was blamed for losing the game. Haha it was all in jest as the other player had the right plan in his mind before we even set up. I have a pile of Black Trees Design Romans, Wargames Factory Vikings and a few already painted Renegade and Black Tree Celts which were bought with DBM in mind. So as soon as I can I will be painting up some Celts and have already based some of the ones I have painted earlier just to get a feel for the game.