New additions to my Sisters of Battle Army

I had assembled an Immolator just before I went away on holiday, and also painted a squad of Repentia and have just finished them off. I had not decided on how to base them as I wanted to redo the old bases.  The basing issue was really easy in the end. I just repainted using watered down house hold paint which is the colour I use on all my other projects. I really wanted to do Urban ruined style bases but thought that this would be hard to do without stripping the wood chip from the bases. Luckily I still have plenty of the old wood chip still in a container. 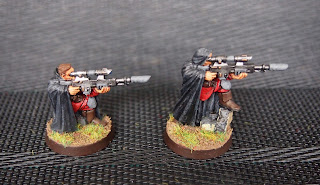 Some of my paint stock has changed over the years but I still had a pot of Citadel Colour Elf Flesh which is a bit like porridge but still usable. I did not realise that this had in fact lightened over the years so I was not really any better off than using something else. My Imperial purple has long since dried up and so I had to use Liche Purple which is a bit lighter. Fortunately GW's reds have not changed much so they matched quite well. I have recently leant that Vallejo's game Colour is compatible with the old GW colours so will have to check them out.

An old Immolator is on the left, new is on the right. 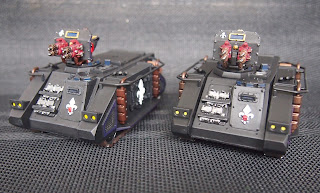 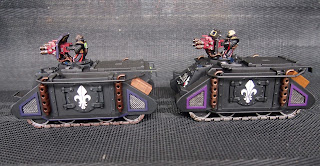 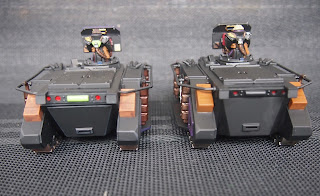 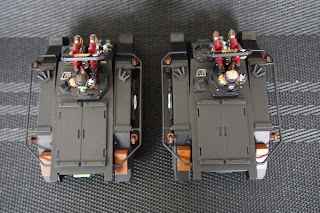 I painted the Repentia to match the old Army which is a bit different to how I would paint them if this was a new Army. Play standard rather than Competition standard. (As if I could paint that well these days lol) The red was nicely highlighted before I sealed the figures. I might have another go at them. 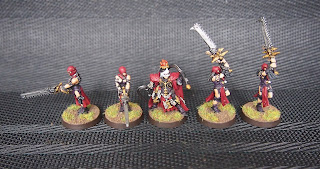 I have just grabbed a couple of squads to repaint the bases as I have nothing else ready to paint right now. I am cleaning up some AZW British Infantry but the two undercoats take a few days to apply so  might as well do something useful with my spare time.